War of the World Weekend Report

What an excellent two days of stock car action at Lochgelly Raceway! Derek McMillan reigned supreme in the Stock Rods as he took the World Championship title across the Irish Sea with him, whilst English Superstar Michael Green was victorious in the Superstox World Championship event. Whilst the Ministox seen Taylor Borthwick claim the National Championship crown!

The afternoon kicked off with an all car parade led by ‘Ninja Piper’ Josh Bruce. Over 100 cars took to the track in the parade as they were welcomed onto the raceway by a massive crowd and a loud introduction.

On the Saturday night, the Superstox World Championship was the first big race of the evening with 36 cars taking to the track, and what a race it was. From the off, Scotland’s Bryan Forrest got off to a perfect start, opening up a car length or 2 in the first lap which meant he would survive a big push from the field, which seen a number of cars spin and come to a halt. Stuart Gilchrist was one of the drivers who was caught up in the crash, although managed to get himself freed and re-joined near the back of the grid, before a yellow flag came out after 2 / 3 laps. Bryan Forrest continued to lead the way with Michael Green just behind and the two drivers opened up a bit of a gap to the field behind, with big hits continuing to go in as drivers made progress through the field. Barry Stephen was making good progress from his midfield starting position and was soon up into the top 5 positions after disposing of a number of cars on route with some big hits. Stuart Gilchrist continued his recovery after a dreadful first couple of laps and was soon back up into the top 10 places, making rapid progress through the field and wasting no time behind any driver. Up front meanwhile, Bryan Forrest and Michael Green exchanged places a number of times with both drivers racing in true stock car fashion. As the back markers began to play a part, it was Michael Green who found the most luck with Bryan Forrest finding life being made difficult by a number of back markers which enabled Green to open up a gap at the front from Forrest. Behind them, Barry Stephen was closing in on both cars as he looked to claim the glory, although, it wasn’t to be as the number of laps ran down. Green took the flag, ahead of Scotland’s Bryan Forrest, Barry Stephen and Stuart Gilchrist in what was one of the best Superstox World Finals’ we’ve witnessed. The following two races for the Superstox were equally as entertaining with the star graded drivers having to fight there way through a pack of cars to get to the front, and it was David Frame and Stuart Gilchrist who took the heat wins in front of their home fans.

The Stock Rods seen 37 cars in action on the Saturday, with drivers from all corners of the UK and Ireland competing. The qualifying heats to determine the grid for the World Championship were split into 3 groups with each driver participating in 2 of the 3 qualifying heats. With just under 30 cars in each of the 3 heats, the racing was fast and frantic throughout the evening, with relatively little incidents, although Darren McAlpine had an evening to forget as he was plagued with troubles including an being involved in an accident that seen him hit the wall with considerable cosmetic damage to the car. The first of the two heats were won by Northern Irish drivers, Derek McMillan and Shane McMillan, before Scotland’s Andy Grant managed to take a race win. As the grid formed, it was Stuart Smyth who had qualified best which meant that he started the World Championship on pole position with Derek McMillan alongside him. Two of the sports quickest drivers, on the front row of a 35 car grid.. As the green flag dropped, it was Smyth who got in front, with McMillan dropping in behind trying to put as much pressure as possible on the Smyth car. As the laps wore on, Smyth continued to lead until just over the half way stage, when McMillan seen a small gap on the inside as they entered turn 3, with Smyth doing his best to cover him off, although it was too late as McMillan was already up the inside as the cars made contact. Both drivers held on and survived any major damage, though it was McMillan who came out in front and never really looked back from that point forward as he opened up a bit of a gap to Smyth and the chasing pack behind him. The race quickly became a battle for third, with Gary Butler, Eric Walker and Dean O’Dell all in the mix, with Andy Grant, Siobhan Martin and Chris Lattka all waiting in the wings as well. A coming together between Butler and Walker seen both drivers ruled out of the mix with O’Dell promoted to third position, and this is the way it would stay in the closing laps, with McMillan taking the win ahead of Smyth and O’Dell.

The Ministox were in action for their National Championship and provided 2 excellent reverse grid qualifying heats, followed by a superb National Championship race. The heat wins went to arguably two of the top drivers of 2019, Taylor Borthwick and Aaron Richards. Upon the National Championship race, Aaron Richards was the driver that led the race for the majority, with Taylor Borthwick behind. From the outset, Richards got into the front with a super battle behind as the youngsters traded blows as they battled for the positions. Mitchell Gold was in great form and was determined to come out in front of those around him. Mitchell Gold and Sam Carter both provided excellent racing, with tit for tat hits lap after lap, with Lewis Burgoyne, Declan Honeyman and Owen Robbins all in the mix as well. Up front, Taylor Borthwick continued to follow less than a car length behind the Richards car, with the gap opening up and closing again on a number of occasions. As the lap boards came out, Richards was still out in front, with a number of back markers coming up ahead of him; this enabled Borthwick to close the gap up again and ensure she was in striking distance come the last lap. As the cars entered the final lap, it was Richards who took the 1 lap to go board. As Richards lapped the Ryan Borthwick car, Richards appeared to run wide which gave Borthwick the better drive out of the corner and she latched onto the back of the Richards car going into the last corner, to provide a delicate but forceful push onto the back bumper of the Richards car. Both cars ran wide, and Borthwick came up the inside. The cars entered the final straight side by side with absolutely nothing between them and it was a race to the line. Borthwick had her nose slightly in front and despite an attempt by Richards to force a move as they approached the finish line, it was Borthwick who took the flag and the National Championship in what was an epic race from the Ministox. Richards took 2nd place with Mitchell Gold rounding out the top three.

The Oval Track Legends seen three qualifying heats take place on the Saturday night before a fourth heat on the Sunday ahead of their European Championship which was ultimately won by 161 Dan Holden.

The 1300 Stock Cars joined in on the action on Sunday afternoon and 20 cars seen some excellent racing from the support formula. Ryan McGill and Brian Allan were out in hire cars, whilst Stevie Aitken was out in a car as well. The opening race of the day for the 1300s seen the bumpers fly in as the laps ran down, with chaos and oil being dispersed in the last couple of laps. Ryan McGill seen his car finish the race with a broken rear axle, and Danny Whyte in a cloud of smoke. Sean Naismith took the opening heat win, whilst Darren Rae went onto take a heat and final double in the following races.

The Superstox raced for their Open Scottish Championship on Sunday which seen 29 cars take to the track. An out of the hat draw seen Chris Hay draw pole position alongside Nick Roots. As the green flag fell, the bumpers went in on the opening lap which seen a huge pileup with a complete restart called for. Bryan Forrest, Chris Roots and Dean Johnston all fell victims to the opening lap drama. The grid re-formed and the race re-commenced with a number of cars sidelined. Eventually, Scotland’s Stuart Gilchrist got to the front and never looked back. Stuart took the flag as he brought an end to his Open Scottish Championship jinx, with Barry Stephen finishing 2nd and Martyn Coles rounding out the top three.

The Stock Rods seen 3 heats as the cars looked to qualify for the Open Scottish Championship. Jock McEwan had a day to forget as he failed to complete no more than a lap in each of his 2 qualifying heats! Ricky White raced to a super heat 1 victory, before Andy Grant and Chris Lattka took victories in heats 2 and 3. The Open Scottish Championship seen Gary Butler and Derek McMillan provide an excellent battle for the lead, with Butler challenging McMillan before some contact, which seen McMillan and Butler make further contact with Butler dropping down the order. McMillan crossed the line in first place, with a huge pack of cars behind led by Siobhan Martin. However, the contact with Butler seen McMillan docked a couple of places handing the win to Siobhan Martin.

The Ministox provided another great day of entertainment with 3 fantastic races as they battled for the Tartan Trophy. Robbie Hamilton and Robbie Armit took the opening two heats before another epic race in the meeting final, which seen Declan Honeyman claim the win, with Mitch Gold and Sam Carter completing the top three. 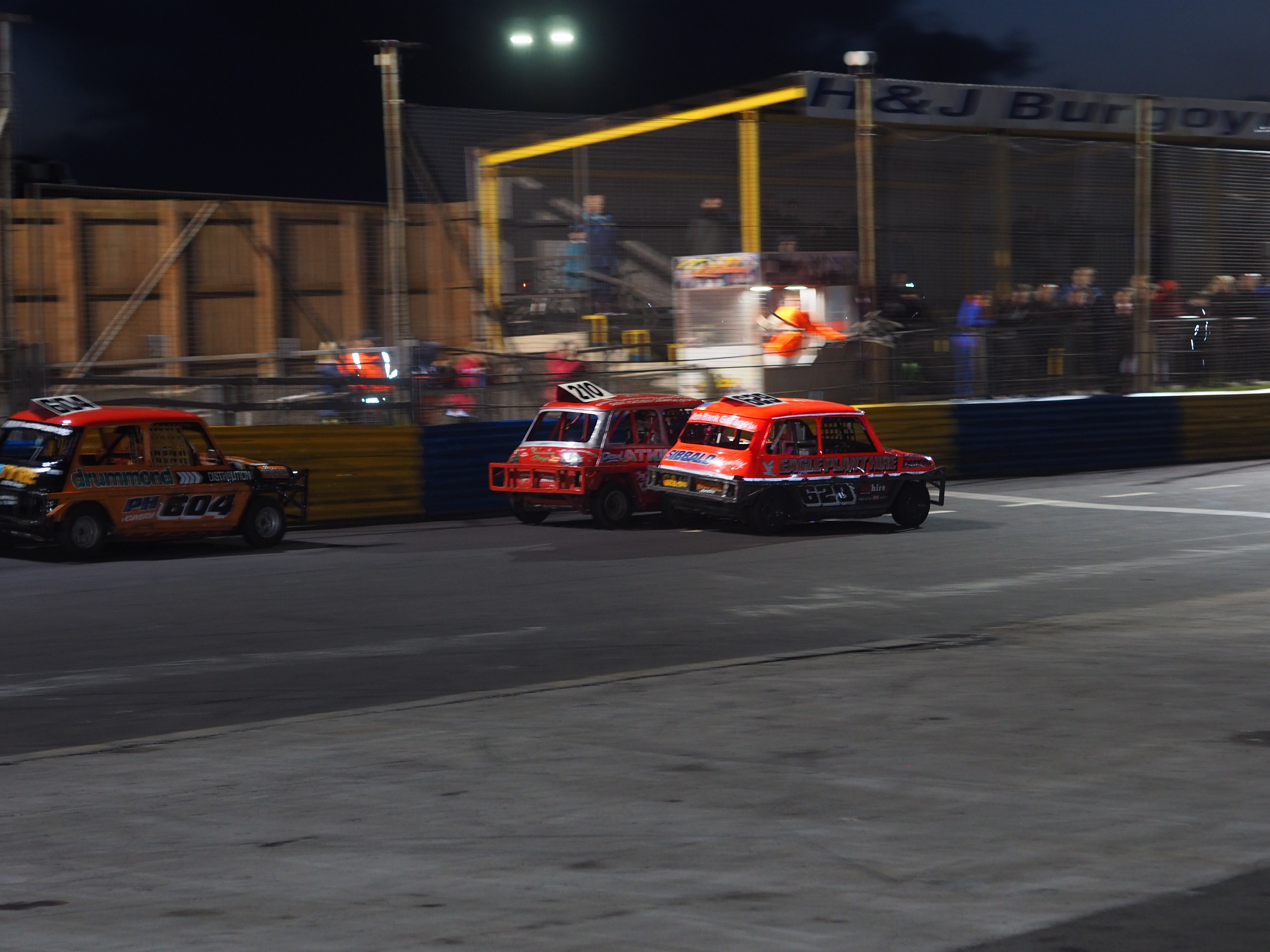