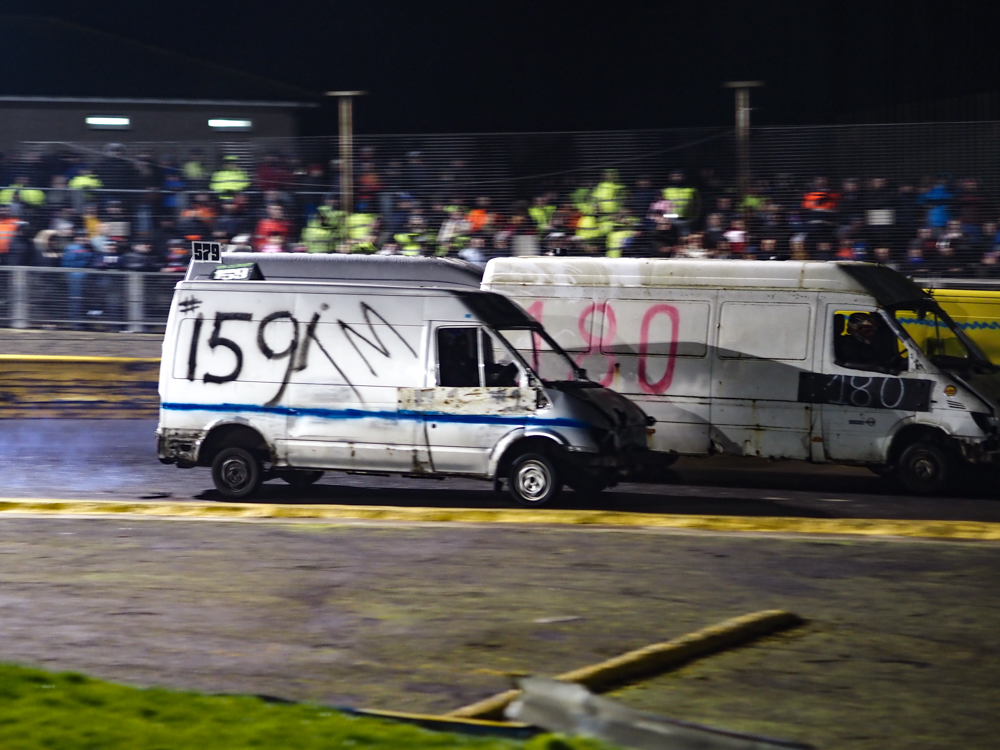 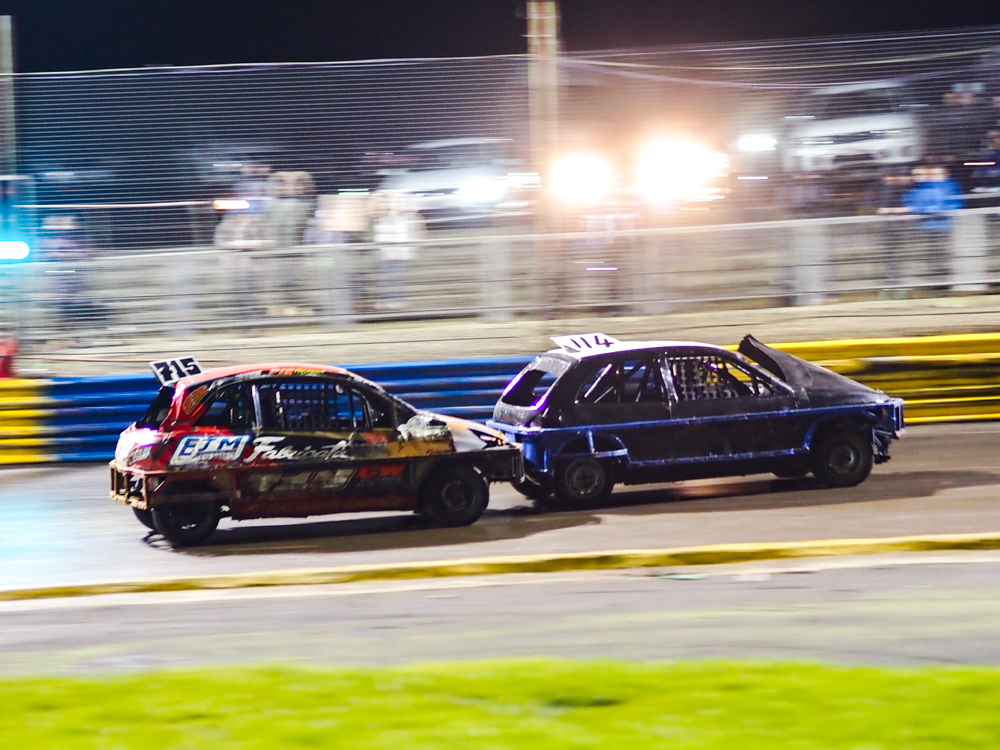 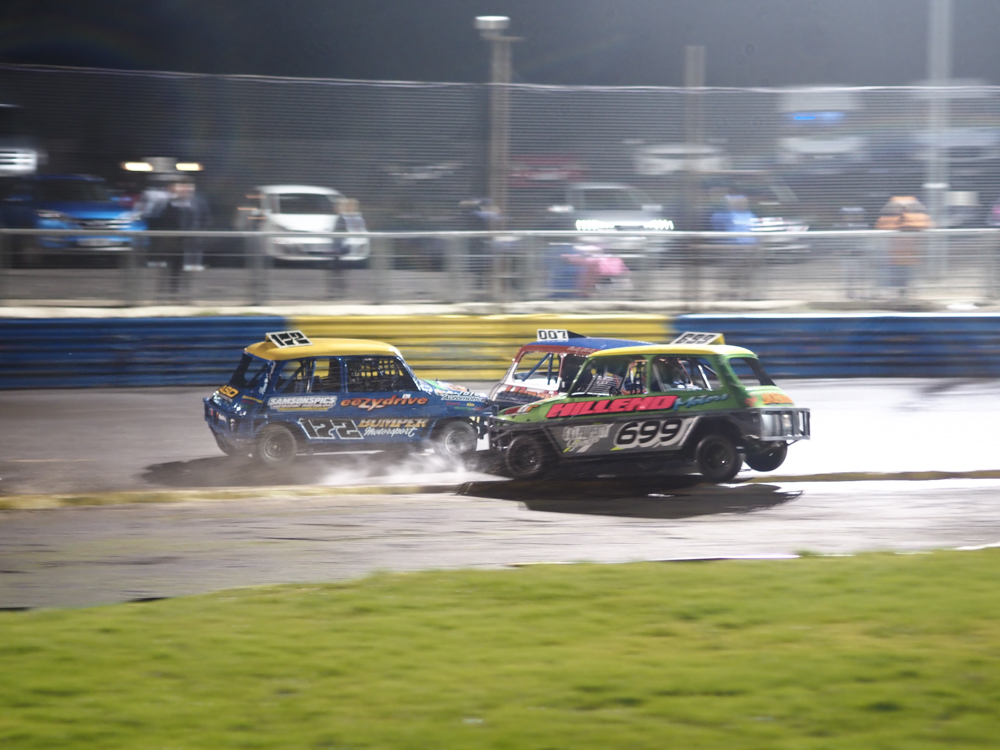 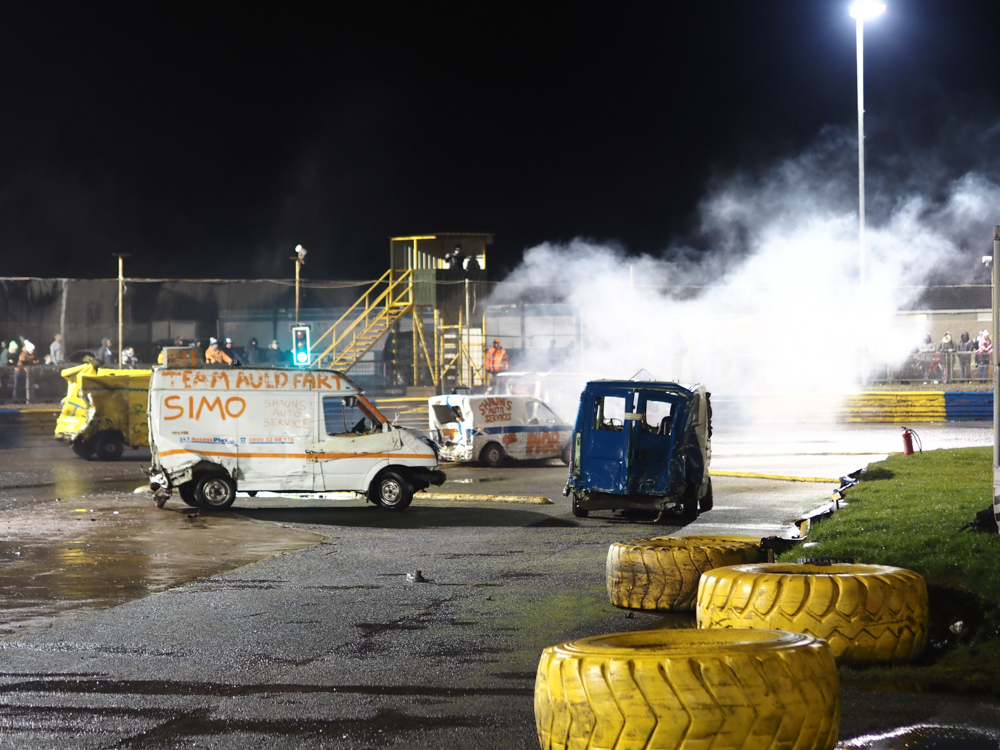 A well attended opening meeting of the 2020 season seen 20+ drivers participate in 3 of the 5 formula in action on the night, with 15 races being turned around in 4 hours.

Many thanks to all that joined us and braved the conditions on the night, with a cold wind and heavy rain throughout the evening. Hopefully the on track action was enough to keep you motivated to see out the evening!

The National Big Van Bangers took centre stage as they raced for the Shaun Walsh Memorial and with a record 20 vans attending on the night, the on track action was frantic from start to finish. The Walshy Memorial was the first race of the night for the vans and seen some big hits going in right from the get go. Lee Clark and Mark Morrison were getting stuck in and hitting almost anything they came across, whilst Chris Thomson wasn't shying away from any hits neither, despite being in a smaller van than most! It was Callum Campbell that came out on top and ensure that the Shaun Walsh Memorial Shield will remain with 'The Mob' for another year. Brian Youngson took his van to victory in each of the remaining two races on the night, whilst Jamie Sangster won the Demolition Derby.

The Stock Rods seen a couple of new drivers to the formula in the shape of Ross Graham and Dean McGill. The opening race of the night went the way of Ross Graham, making his debut in the formula as he opened up a healthy advantage over the rest of the grid with Stewart Paterson unable to close the gap in 2nd place. The second heat of the evening seen Chris Lattka show excellent speed from the outset and quickly found himself battling for the lead. Gunner took a comfortable win in the end with McGill and Graham rounding out the top three. The meeting final seen Chris Lattka and Siobhan Martin battle in the early stages of the race with nothing between the pair. It was Siobhan who managed to get the break and opened up a lead of a few car lengths which she maintained for the remainder of the race, with Lattka finishing second and Sneddon third.

The 1300 Stock Cars had in excess of 20 cars take to the track, with several new faces and former World Champion Ross Fisher on the grid. John Whyte showed some excellent pace in each of the three races, battling for the lead for the majority of the two heats, before Ross Fisher moved ahead. Whyte took an excellent 2nd place in the opening race, ahead of Andrew Mathieson. The second race was much the same, but with Declan Lindsell in amongst the battle for the lead. Declan and Whyte had a good battle throughout, with nothing between them for the main part of the race, though again, it was Fisher that took the race win! The meeting final seen an excellent finish to the evening for the 1300 Stock Cars, with a few hits going in around the raceway, and Danny Whyte losing a wheel to bring out a yellow flag, closing the pack up! Ross Fisher, Eddie Corr, and Sean Naismith led the way for the battle for the lead, with Mike Courts and Declan Lindsell also in the reckoning. The lead drivers traded blows, dummied each other and had a scintillating end to the race, with Fisher crossing the line sideways with Naismith attempting a spin on the final straight, with Eddie Corr completing the top three!

The Ministox continued from where they left off in the 2020 season with a good grid of cars and competitive racing. A few drivers have now moved on from the formula, with a few newcomers joining in as well. Charlie Henry is in her final year in the formula and sported a new number and colour scheme in memory of her grandad. She was in no mood for being pushed around and put her front bumper to effect throughout the evening. Though she didn't pick up any points on the evening, it certainly wasn't for a lack of effort. Bailey Millar was showing some good pace and was unfortunate not to come away with any points after being disqualified in the opening race and spinning out in the latter two races. Rachel Kidd continues her improvement in the Ministox after graduating from Ninja Karts last year, picking up a couple of confidence boosting results on the night, whilst fellow former Ninja Kart star Charlie Hardie showed good pace, was often in the wrong place at the wrong time being caught up in a few bumps on the night. The opening race of the night seen Brandon Morton cross the line first ahead of Rachel Kidd and Bailey Millar, however, the three drivers removed themselves from their cars before being instructed to do so and as a result, were disqualified from the race, that gave the win to National Points champion Mitchell Gold, with Robbie Armit taking second and Rian Mitchell third. The second heat of the night seen Brandon Morton continue his excellent form as he roared to a second chequered flag of the night, and this time, was awarded the victory, with Mitchell Gold and Rian Mitchell completing the top three. The meeting final seen Morton again take the flag, which could have meant a hat trick of race wins on the night! As it was though, it was only his second official win on the evening, again with Mitchell Gold finishing behind him. Rachel Kidd put in an excellent performance to take third position.

The Junior Productions have seen a solid increase in car numbers over the winter months with a few new drivers taking to the formula, although not all made it out on Saturday night with a few not having cars ready as yet. Jack McLeod faired best of the newcomers on the night, showing good pace and consistency whilst picking up a few decent results on the night. Jase Walle raced to an emphatic win on the opening race of the night, with John Bremner, sporting a new colour scheme for 2020 finishing second and Kyle Rogerson finishing third. Heat 2 of the night seen Bremner go one better and take his first race win of the 2020 season ahead of Koddi Wright and Kyle Rogerson. The meeting final seen Jase Walle take his second race win of the evening, which will see him promoted to blue grade for the next meeting, finishing ahead of Dylan Smart and John Bremner. 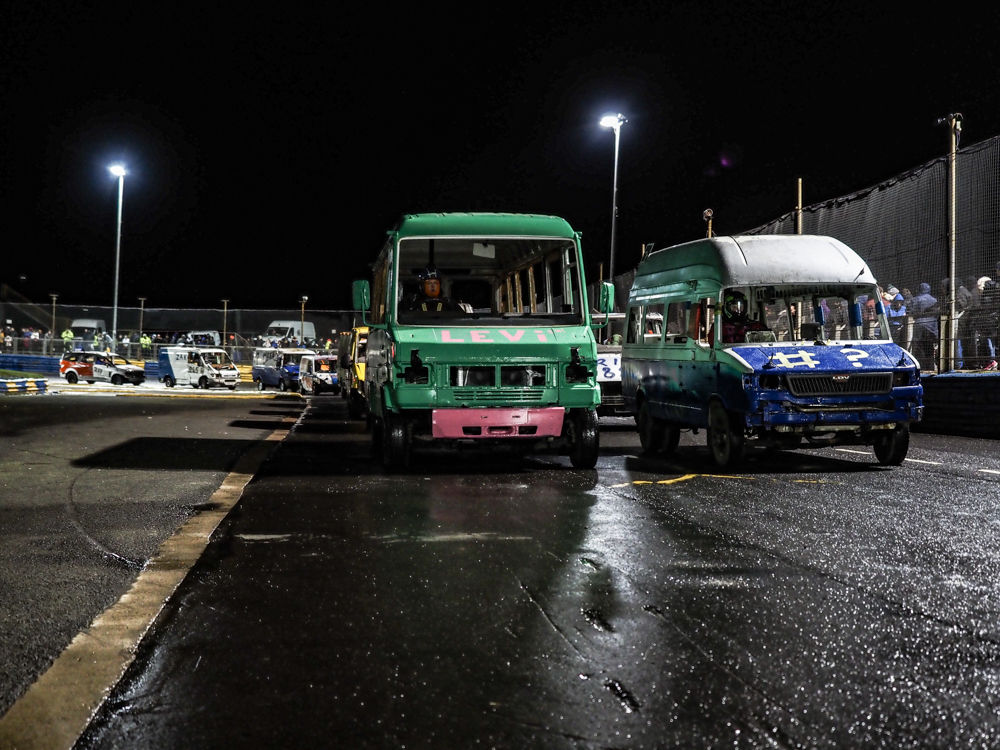