Ford At The Double In 1300 Stock Cars

Ford At The Double In 1300 Stock Cars 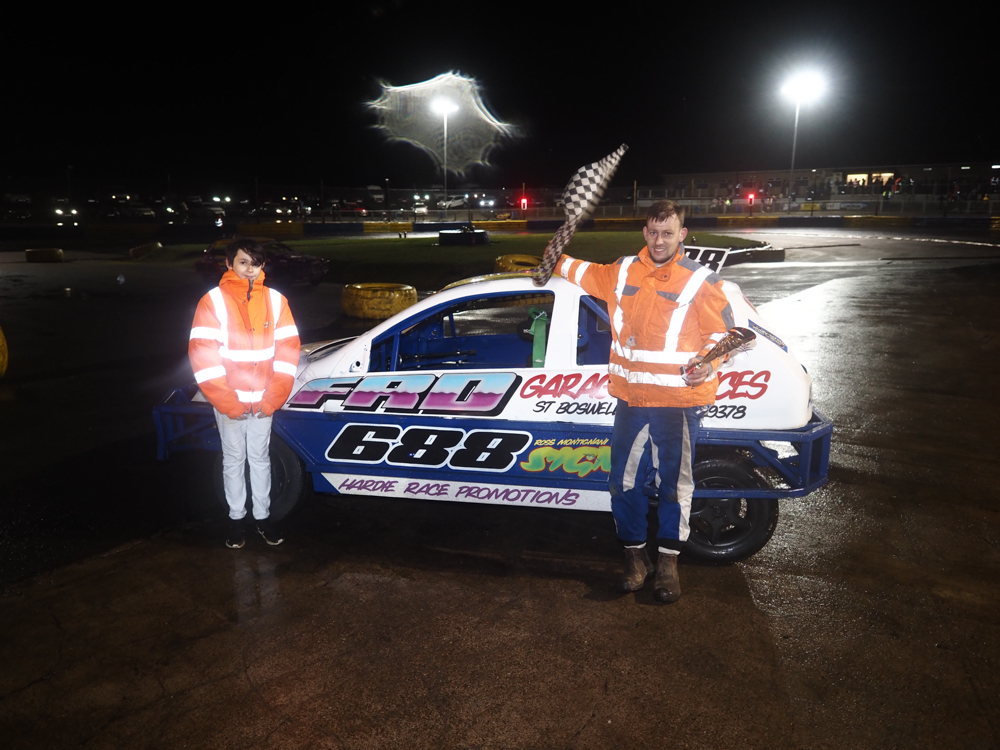 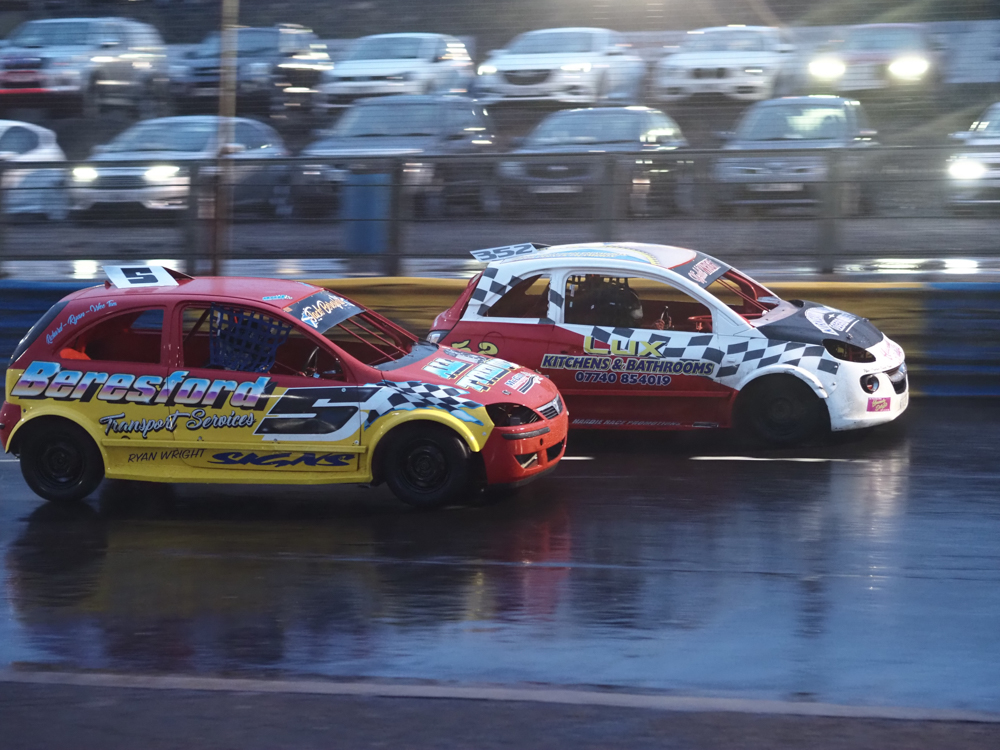 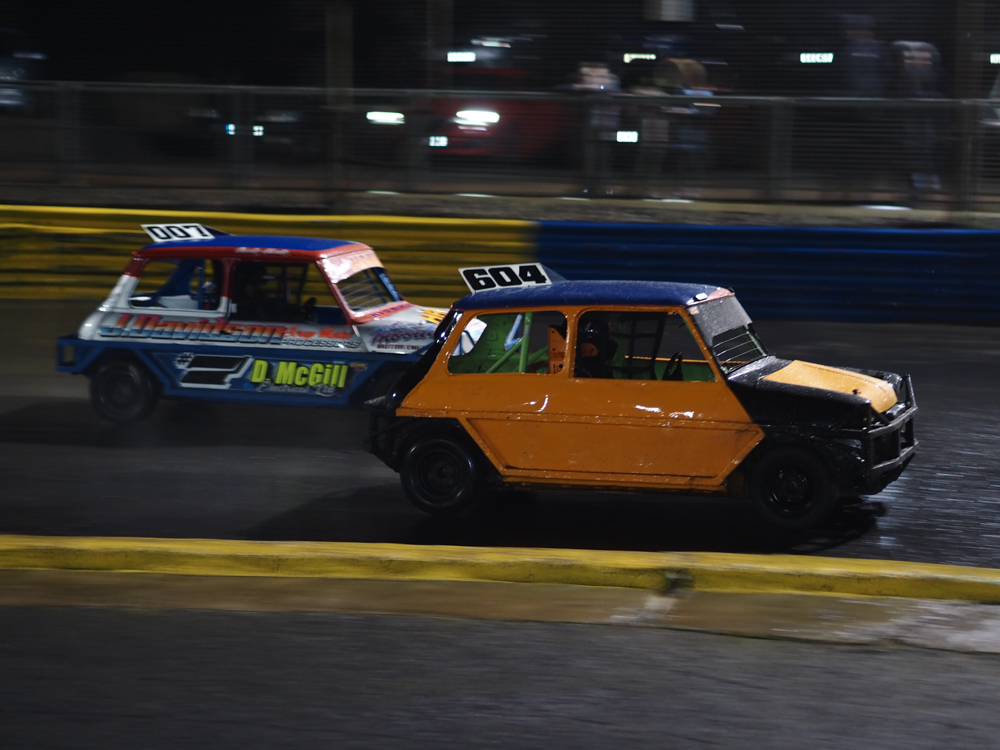 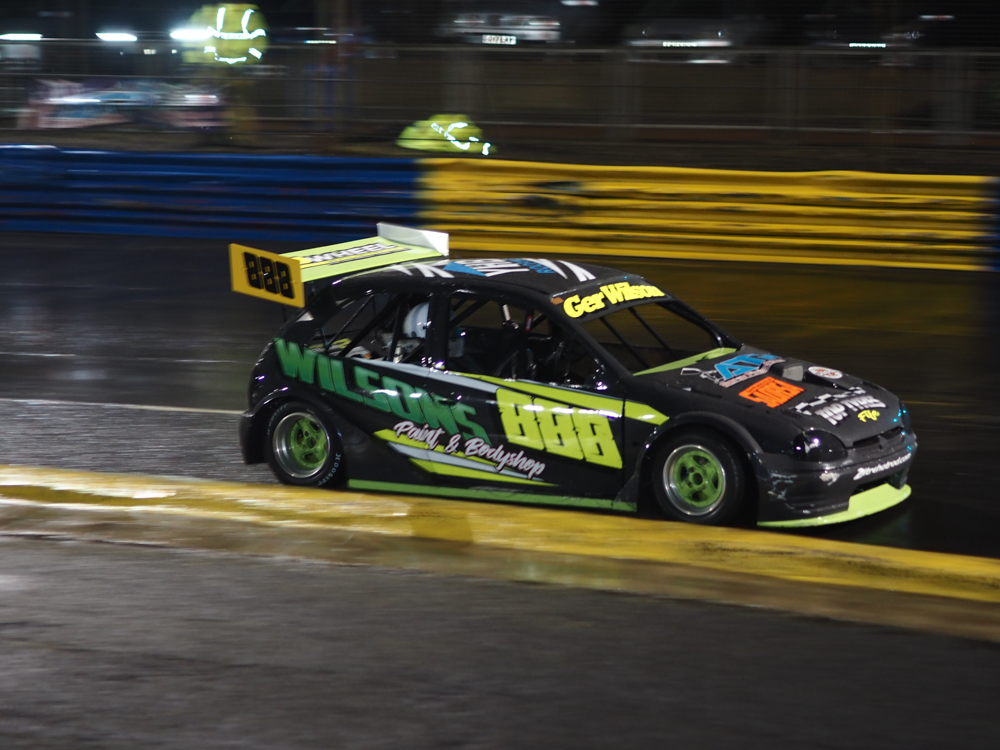 What a fantastic evening of Stock Car Racing we had on Saturday 14th March at Lochgelly Raceway.

Despite the weather doing its utmost again to put a dampner on thing, the drivers turned out in numbers and put on a show for the expectant crowd.

The 1300 Stock Cars were the formula that drew most attention with a fantastic amount of cars taking to the track, promising entertainment throughout the evening.

The Junior Productions kicked off the evening as the rain began to fall. Kyle Rogerson got away well from his yellow grade starting slot, and was quickly chasing down those in front of him, James Slater and Jack MacLeod. Kyle moved into the lead within a few laps, but soon had the oncoming Lennon Grant chasing him down for the lead of the race. Lennon made his move to overtake the Rogerson car and found himself in the lead of the race, just over the halfway point. John Bremner was up into third place with Harvey Sneddon not too far behind. The closing laps seen John Bremner challenge Kyle Rogerson for second place, and with Rogerson running wide going into the turn one on the final lap, Bremner seen a gap and put his nose in, though the gap disappeared with minimal contact between the two cars. Rogerson held onto second place up the straight and into turn three, with Bremner still challenging, and as the cars exited turn 4 alongside each other, it was Bremner who crossed the line just ahead of Rogerson, with the two cars tangling and crashing after the chequered flag. Heat 2 of the evening for the Juniors seen Jack Beresford bring his new car home in victory lane following the docking of Lennon Grant who had crossed the line first, with Jase Walle continuing his impressive start to the season, finishing in second with the demoted Lennon Grant in third. The meeting final seen another excellent race from the Junior Productions, although with a slightly depleted field of cars. Harvey Sneddon and Koddi Wright did there best to battle there way through the grid from the back of the field, though found the going tough with many of the cars in front showing great pace and consistency. Jase Wall took the victory in the race, with Lennon Grant finishing second, and Jack Beresford in third.

The Ministox were again in great numbers, with just under 20 cars taking to the track for the opening race of the night for the formula. The ever improving Rachel Kidd continued her development in the formula and took her maiden victory in the opening race – the first of many more to come we’d expect – Fellow former Ninja Kart driver Charlie Hardie took his car to a second place finish after an excellent battle with Brandon Morton for the second half of the race, with Hardie finishing just ahead of the Morton car. Brandon Morton picked up the pace in heat 2, and found himself a little more breathing space on track from those challenging behind. Rachel Kidd again led the race in the early staged and once caught by Brandon, didn’t let the position go without a fight. Brandon looked to have pulled enough of a gap to Rachel with around 5 laps to go, but Rachel came back at Brandon with the pair duelling for the win for the remaining laps. Brandon took the race win, with Kidd getting a second position, with National Points Champion Mitch Gold finishing in third. The meeting final seen Brandon continue with his impressive start to the season as he took another excellent race win in more comfortable fashion this time as the pack behind battled it out for the other places. Ryan Borthwick and Charlie Hardie had an excellent battle throughout the race, and ultimately, an excellent battle for second place, with Hardie pulling away in the early stages of the race. Borthwick was never too far behind though, and caught up with the 007 car before forcing his way through into second place. Borthwick managed to open up a bit of a gap to Charlie Hardie and had his eyes on trying to chase down the leader out in front. Charlie Hardie didn’t give up the fight though, and closed the gap to the Ryan Borthwick car again, and managing to make a last lap effort to take second place. Contact was made on the back of the Borthwick car, however, not enough to dislodge him, and Ryan brought his car home to an excellent second place finish with Hardie rounding out the top three.

The 2.0 Hot Rods made their season debut with 11 cars taking to the track at the beginning of the night. Marc Fortune was plagued by problems though, and didn’t make the opening lap of any of the races on the night. The lower graded drivers, Cameron Willacy and Ger Wilson both showed great pace throughout the night, with the pair of them taking the race wins between them. Ger Wilson took a heat and final double, that will see him promoted to blue grade for the next event, whilst Cameron took his first ever win in the class. Ger will have been gutted to miss out on a hat trick of race wins after nudging Cameron Willacy in the second heat with a lap to go as they battled for the lead. Spotted by the race steward, Wilson had the win taken away from him and docked a couple of places for the contact, dropping him down to third place.

The CC Rods were in action for the second meeting in succession. David Glencross made his return to racing after a number of years on the sidelines and battled his way from the back of the field into contention for points places in each of the three races. Brandon Gourlay had a disaster of a meeting last week, but made amends this week, taking the opening heat race win as well as the meeting final – a feat that will see him elevated to red grade for the next CC Rod event! Ian Donaldson again had his car going well in the wet conditions, finishing in second place in the opening heat from the rear of the grid. Brian Allen completed the top three in the opening heat of the night. Allen is another driver that has started the season in fine form, also taking a race win in the second heat of the night. Kyle Hutchison hasn’t had too much luck in the first two meetings of the season, but will be happy to finish in second place in the second heat of the night. The meeting final seen Brandon Gourlay race away and into the distance as he never looked like being challenge as he took the win. Behind him though, there was a great three way battle going on for second place between Ian Donaldson, Ian Taylor and Andy Nelson. Nelson, sitting second and under pressure from Taylor battled superbly to hang onto the place. The pair of them tried to out battle each other with Ian Donaldson lurking just behind. It was Ian Taylor though, that used his experience to bring his car home ahead of Andrew Nelson in the end, with Donaldson finishing fourth and David Glencross fifth.

The 1300 Stock cars were the final formula on the agenda, and with around 30 cars taking to the track, it was never going to be a quiet affair! The opening race of the evening for the full contact formula seen two complete restarts following a host of early crashes. Craig Warner found himself with a bit of damage which put an end to his evening, though not nearly as much as Declan Lindsell! Lindsell found himself pointing the wrong way on the back straight with a pack of almost 30 cars coming towards him, it was a matter of who, not when, someone would collect him! Danny Whyte would be that person that didn’t see the stationary car and run into him, with Steven Gold also in contact with Danny at the time of impact. A fair amount of damage was had to the Lindsell car, with the Whyte car also suffering, though to a lesser extent. Dougie Ford was in excellent form on the night, as he took his newly built car to an opening heat win, with Kyle Hegg and Rory Naismith completing the top three in the opening race. Heat 2 of the night, seen another frantic race, with numerous cars jostling for position throughout and again, it was Dougie Ford that crossed the line in first place, however, he would have that win taken from him as he started in the wrong grid position at the beginning of the race. Fraser Clark inherited the race win as a result, with Hegg taking second and Ford down to third. The meeting final was yet another lively affair, with Conor Mason being in the wrong place at the wrong time in two consecutive corners as he was pushed wide and into the barrier by the pack of cars behind, before being clattered again at the next corner, where he went sideways into the wall, bringing out a race caution. Dougie Ford seen his lead of the race disappear with the pack now right behind him. Though, the in form Ford, wouldn’t let that phase him and held on to take a super race win, with Fraser Clark and Kyle Hegg completing the top three!

We hope to be back in action this Saturday night with a 5.45pm start time – visit our website for further information! 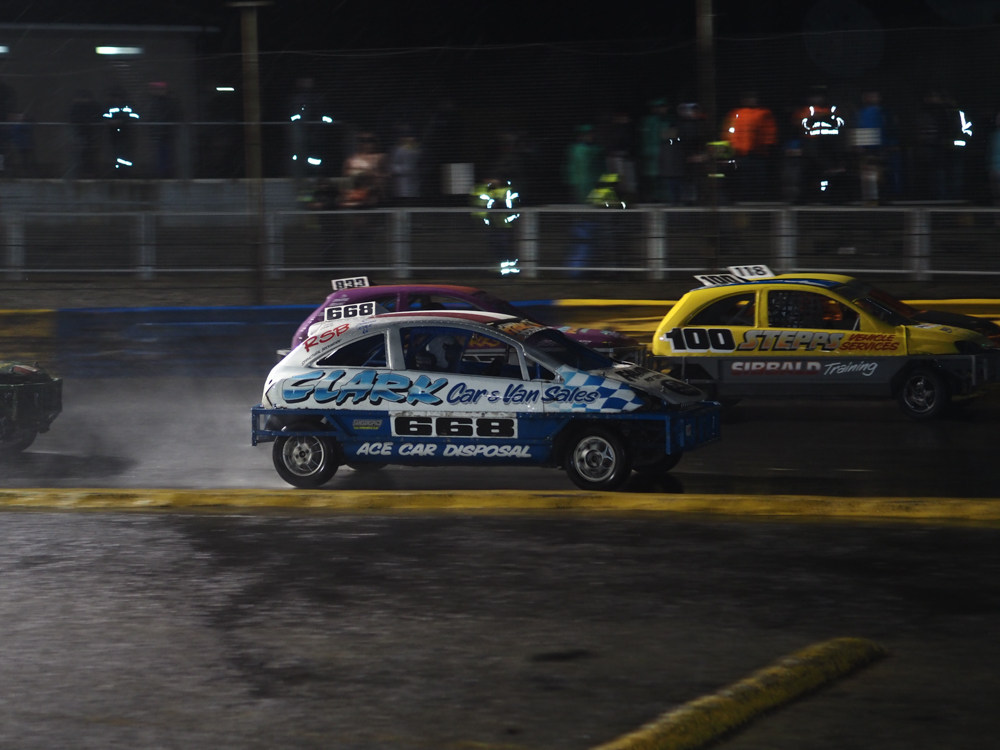