Kopacz at the double

Kopacz at the double 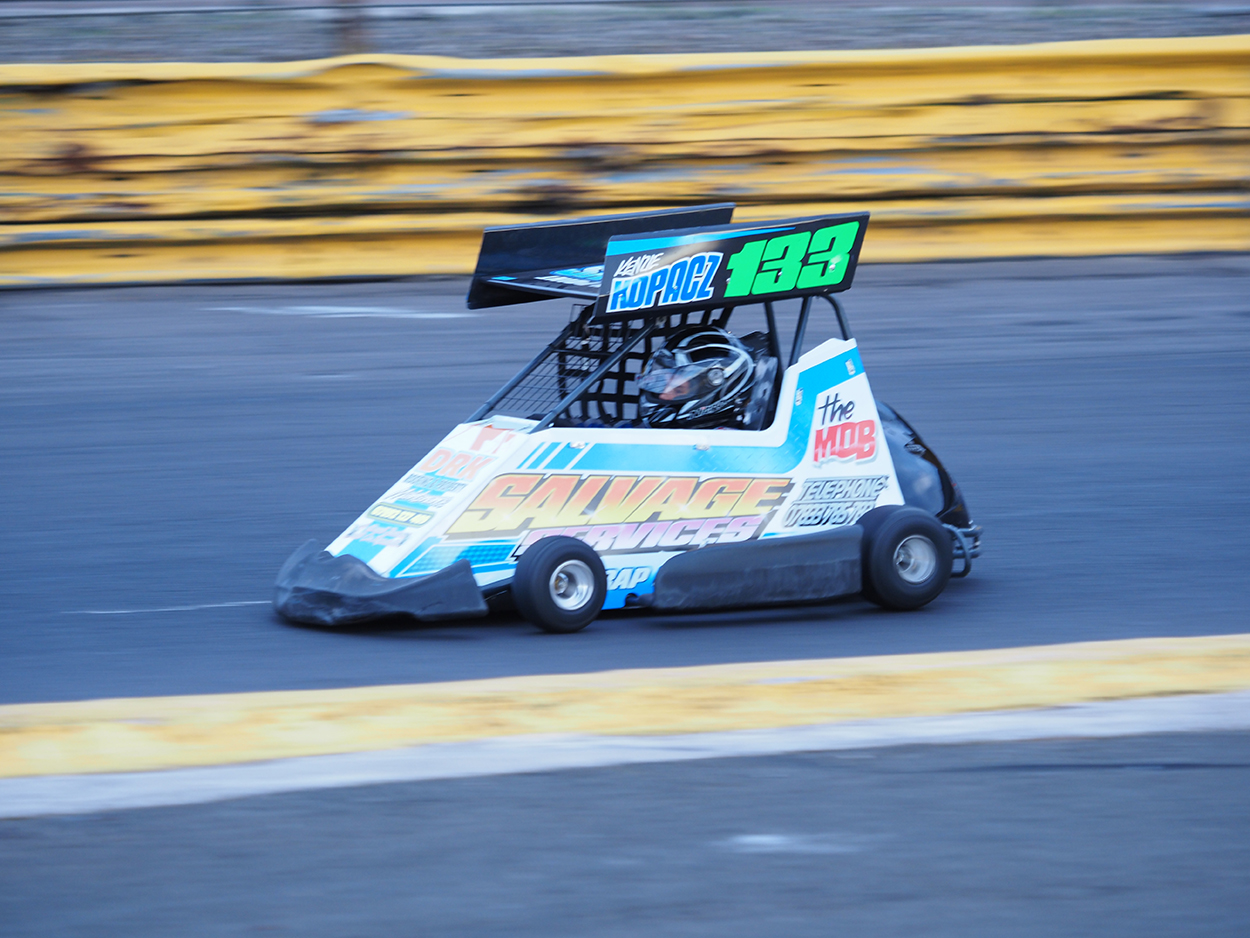 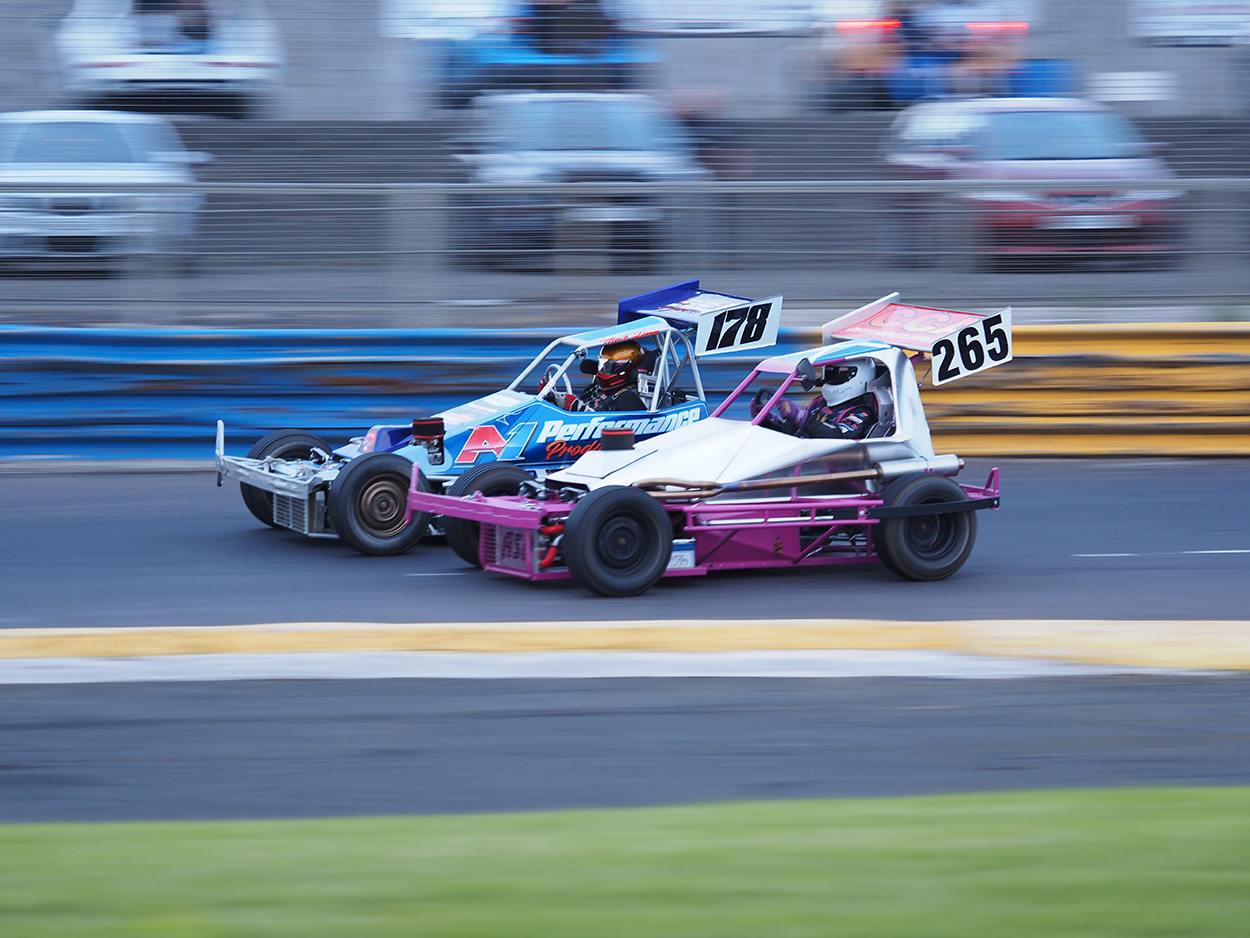 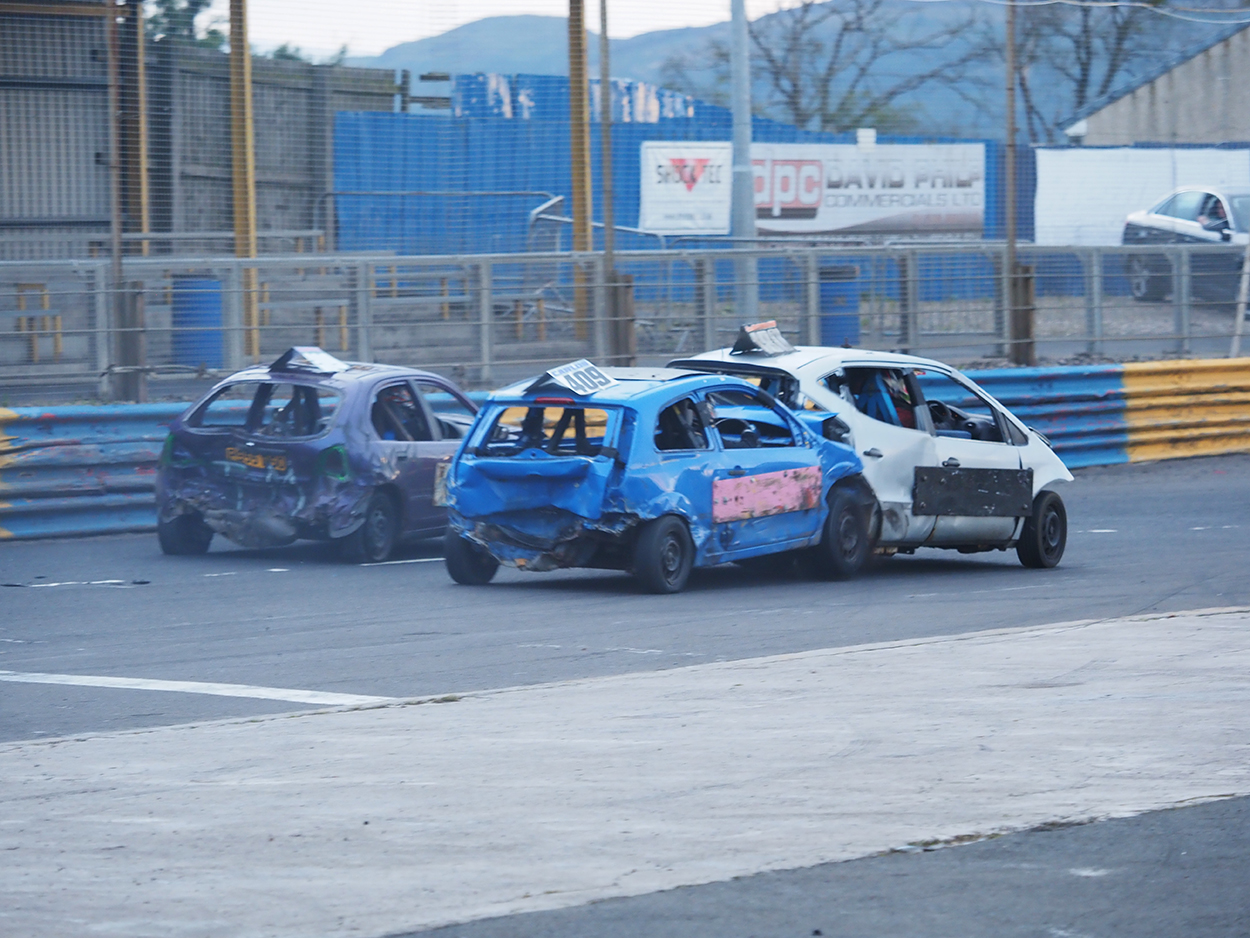 An excellent evening of racing at Lochgelly Raceway seen a superb mix of contact and non-contact formula in action, with the Ninja Karts and CC Rods providing some nail biting action throughout the evening.

The Back 2 Basics bangers made their first outing at Lochgelly Raceway in several years, with a reasonable amount of cars making the effort in attending. The formula has the aim of reducing the time and costs involved in building a banger, so you can realistically be out on track for a few hundred pounds! These cars are required to start off the key, and have radiators in the original location. Bonnets and doors are to be tied closed through the use of old seat belts, with a roll cage and door plate installed for driver protection, as well as the normal safety equipment required to race. It was the drivers representing ‘The Mob’ that looked quickest. James Dillon made a return to action and took 2 race wins for his efforts, with the first race being won on the last lap after the discarding of Chris Thomson! Team ? were represented by several drivers, with all of them intent on having a good time, there wasn’t many straight panels on the cars come the end of the evening!! The Back 2 Basics bangers are back in action at Lochgelly Raceway on the 29th August. Ensure you join us for that one with even more cars expected to be in attendance.

The youngsters in the Ninja Karts never fail to impress, and although a few were absent at the weekend, that didn’t stop the kids from putting on a show. Jack Connor got things off to a perfect start with a confidence boosting win in the whites and yellows race, the opening race of the night. Kenzie Kopacz had an excellent evening in his kart, taking 2 race wins and a third place for his efforts – He’ll be showing his dad up in no time at all if he keeps up the form throughout the year!! Toby Tyson took a race win in dramatic fashion in the first main heat of the night after an epic battle with Connie Anderson! Connie had led the way and refused to be intimidated by the Scottish Champion challenging for the lead. Connie held her nerve and battled Toby bravely for at least 5 laps as they raced side by side for the best part. It was only on the last lap as they manoeuvred through back markers, where Connie went one way, and Toby the other, that allowed Toby to come out in front. Connie will be satisfied with her efforts though, going home with a couple of trophies and a good haul of points. Kenzie Bell showed good pace throughout, but didn’t have too much luck on the night despite coming away with a second place in the second heat, ending up with some damage in the final race of the evening.

The CC Rods had a few less cars than we had anticipated, however, that didn’t dampen the efforts of the drivers, with three excellent races. The budget non contact class always seems to deliver great racing. It was great to see a few new drivers out in action, with Ryan Cameron and Paul Bell joining the ranks – both of whom picked up a race win! Dylan Coutts took the opening race win after reeling in Paul Bell who looked to have the race in the bag, though seemed to struggle with the car as the race wore on. A fantastic battle then ensued for the places behind Dylan, with Bell doing his utmost to hold off Ryan Cameron, Kyle Hutchison and Lee Scott, though dropped down to 4th come the chequered flag. Heat 2 of the night seen Bell make a few changes to the car and took a race win as a result, with Ryan Cameron and Brandon Gourlay unable to make too many inroads into his lead. The meeting final seen another superb race. Although Ryan Cameron got out in front, it was never plain sailing as he had Brandon Gourlay with him for the majority of the race. With Gourlay unable to overcome the Cameron car, the packed closed up, and soon it was a 4 way battle for the lead with Ian Taylor and Kyle Hutchison in contention as well, with Lee Scott hovering not to far behind. Taylor tried a couple of times to go around the outside, but soon found himself losing ground, to those behind him, and quickly found his third place under threat. Taylor used his experience well however, and managed to get back to the inside line to secure the third position berth.

The Superstox were the final formula in action, and it was Bryan Forrest who got things underway with a race win in the opening race of the night for the formula, overcoming early pace setter Mark Dews who seemed to have the race wrapped up before a yellow flag caution bunched the field up. Barry Stephen, Mark Brady and Jack Turbitt made there season debuts, whilst former Ministox star Ciaran Adams made his debut in the formula. The open wheel formula produced some excellent racing, particularly in the mid field battles, with Evan and Lee Clark, getting stuck in as they battled to claim as many points as they could. Mark Dews made amends after missing out on the win in the opening race, taking a heat win in the second race of the night, before having a spin in the meeting final! Barry Stephen showed improvements throughout the night in his new KMR built Superstox, improving his placings with each and every race before winning the meeting final, finishing ahead of Dean Johnston and Bryan Forrest.

We are back in action this Friday night, though, are only accepting advance bookings through the HRP website, at www.hardieracepromotions.co.uk.