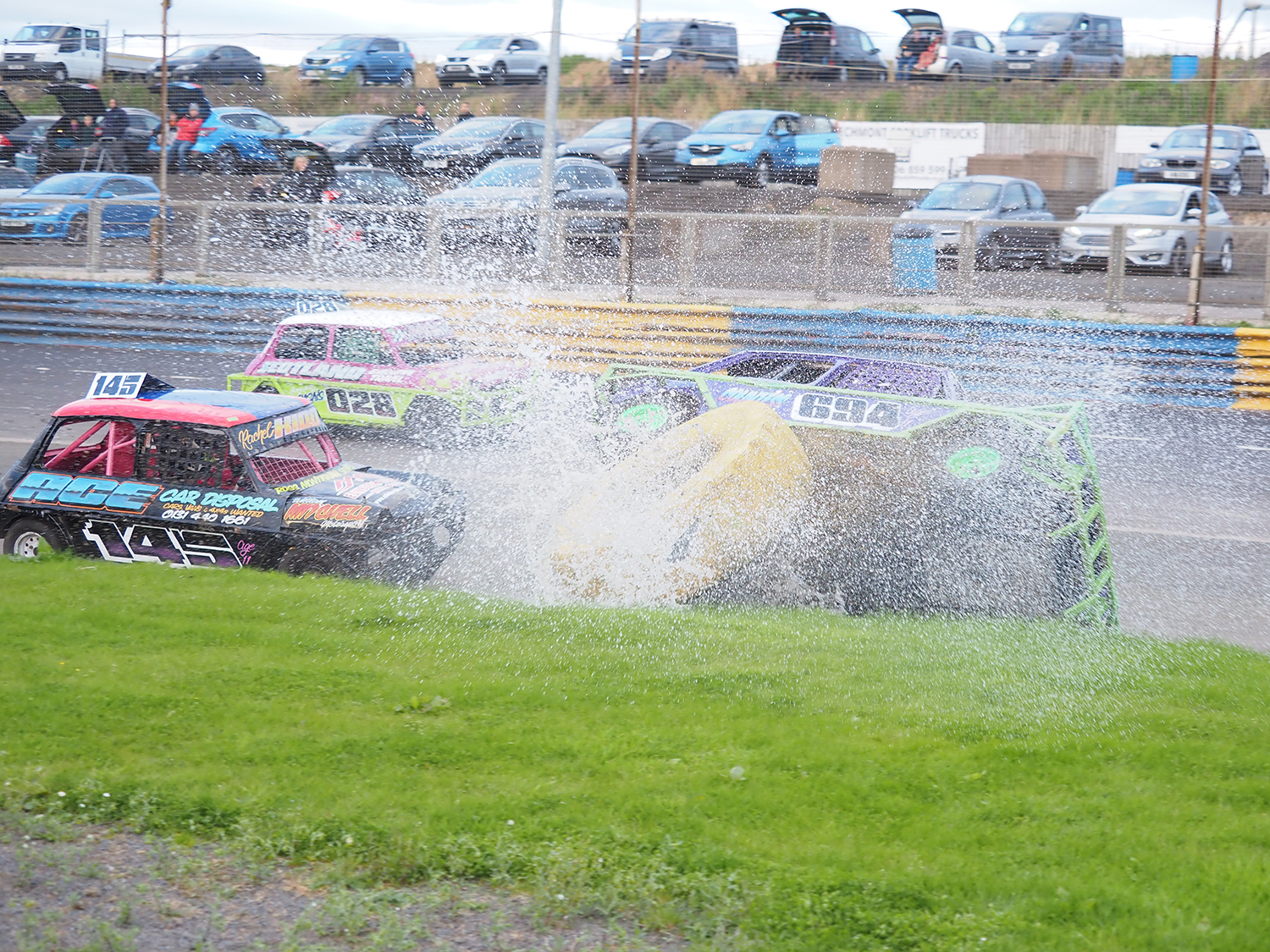 It was another fine night at Lochgelly Raceway on Saturday 29th August, with every formula in excellent form.

The Back 2 Basics bangers really seem to be picking up with growing interest in the formula, with the grid growing by over 50% against the meeting only a few weeks ago! Several new drivers made an appearance on Saturday in the budget banger racing class, with Thomas Rae and Ryan Waugh, a couple of the drivers to make there debuts! The field was bolstered by some regular banger racing drivers, with Jamie Sangster showing some great speed and the ability to use the bumper to great effect as well. Chris Thomson, another regular banger driver took a race win in the opening race of the night, leading from flag to flag, with a DNF in the 2nd race, before a big head on in the final seen an end to his night. That head on in the final was at quite some force, with the impact sending the Gary Mentiplay car over onto its roof! 1300 Stock Car driver Barry Jarman was in the mix of the action, and somehow managed to ‘bandage’ his car together to make it out for the final, and in turn, taking an excellent race win!! The Demolition Derby was won by Mark Morrison. The next outing for the Back 2 Basics Banger class is their Scottish Championship on the 26th September!

The CC Rods seen Lee Scott take a heat and final double, which will see him elevated to red grade for the next month, with debutant Lochgelly based driver, Steven Duffy also taking a fine race win. Lee Scott took the opening race win after breaking clear of the pack and leading home Kris Douglas and Brandon Gourlay. Duffy took the 2nd heat of the night in excellent style – holding on for dear in the last few laps as the pack piled the pressure on – Duffy held his nerve though, and took a narrow race victory ahead of Ryan Cameron and Brian Allen. The meeting final seen Lee Scott control the race, taking a near flag to flag victory, with Brian Allen and Dylan Coutts completing the top 3.

An excellent 26 Ministox took to the track in the opening race of the night and the bumpers flew in thick and fast. A couple of race stoppages in the opening race of the night seen the star graded drivers manage to close up on the cars ahead. Charlie Hardie took the race win, just ahead of Lewis Burgoyne, who continued his excellent form here at Lochgelly Raceway, with Robbie Armit taking 3rd. The 2nd race of the night was unfortunately declared null and void after a big crash seen Warwick McClymont make a considerable impact with the barrier midway through the race. With a delay in proceedings, a decision was taken to void the race. Zara Hutchinson also had a big rollover in the Ministox as she made her 2nd outing in the formula. Zara was a little sore, however, made it back out for the meeting final. The meeting final seen Charlie Hardie and Scott Allardyce tangle in the early stages of the race, with both cars spinning around dropping them back the order. Lewis Burgoyne chased down the quick moving Bailey Millar at the front and the pair had an excellent race over the closing 5/6 laps, with Lewis hanging on from a last lap lunge from Bailey to take the race win. Bailey took 2nd place with Robbie Armit taking 3rd position.

The 2.0 Hot Rods were the final formula in action with 13 cars in attendance. Former 2.0 Saloon Stock Car driver Greg Honeyman joined the ranks and made a decent start to his Hot Rod career despite starting from the back of the grid throughout the night. Ryan Mackie, sporting another new colour scheme, took the opening race win of the night ahead of Cameron Willacy and Marc Fortune. Heat 2 of the night seen an excellent battle for the lead as Wayne Lee and Cameron Willacy battled it out, with Marc Fortune closing in on them. As the trio battled it out, a coming together between Willacy and Fortune seen Willacy lock up and hit the wall ending his nights action, with Fortune being disqualified for his part in the incident. Wayne Lee took his first race win though, with Derek Connor and Kevin Stewart rounding out the top three. The meeting final seen Kevin Stewart get away best and took a flag to flag victory, as Derek Connor took a 2nd place finish, with Scott Devine in 3rd.

This weekend at Lochgelly Raceway, we see the Rookie Bangers race for the Scottish Championship on Saturday, whilst the Rookies make way for the Micro Bangers on Sunday. The 1300 Stock Cars, Superstox and Ministox all feature on both Saturday and Sunday. The Stock Rods support on Saturday, in what is there final home meeting before their Scottish Championship, and the 2.0 Hot Rods feature on Sunday. Advance booking only via hardieracepromotions.co.uk

Everyone at HRP would like to wish Warwick McClymont a speedy recovery following his incident on Saturday night – we would like to extend our thanks to our medical team, as well as those from the emergency services that attended.