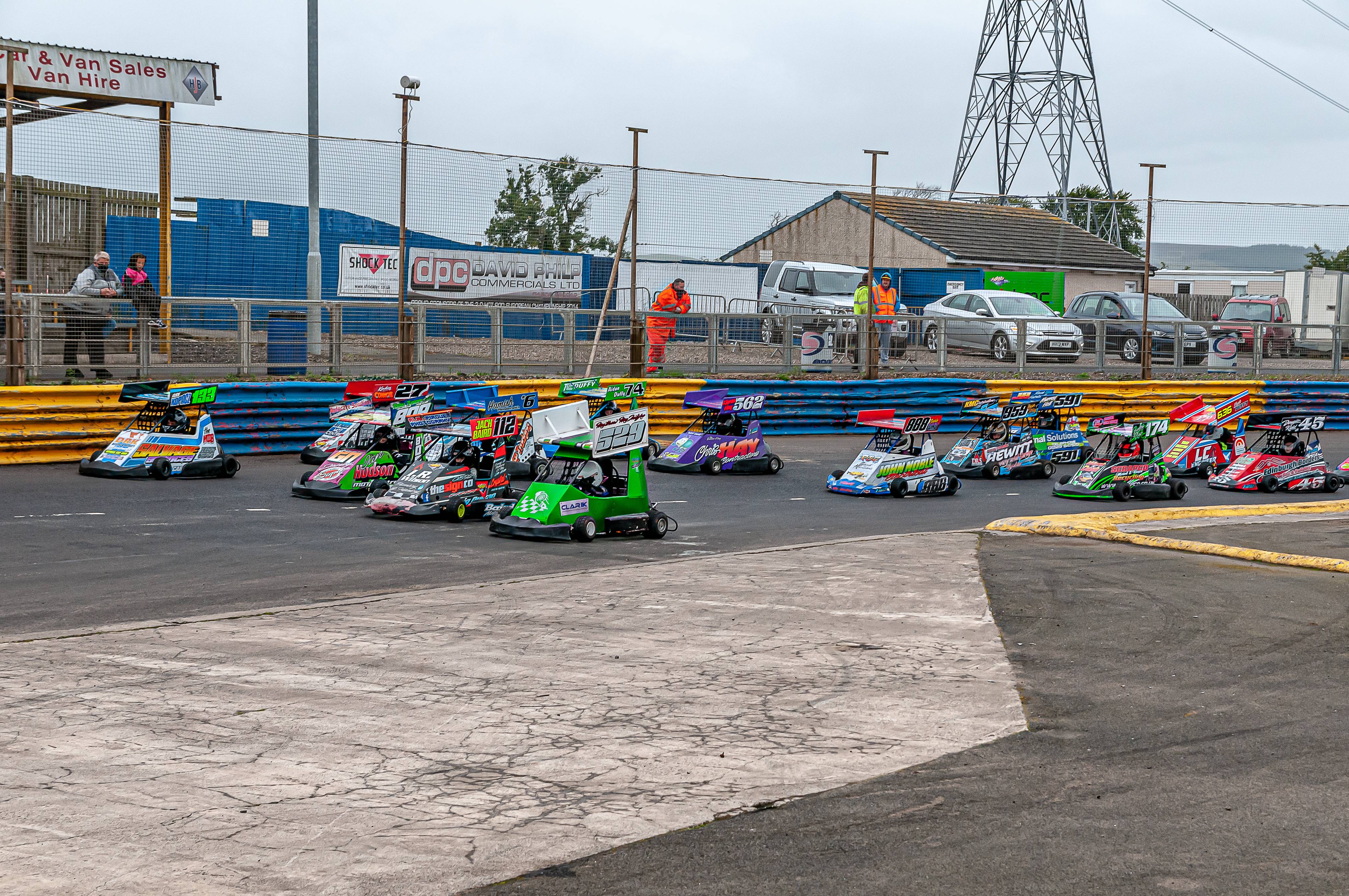 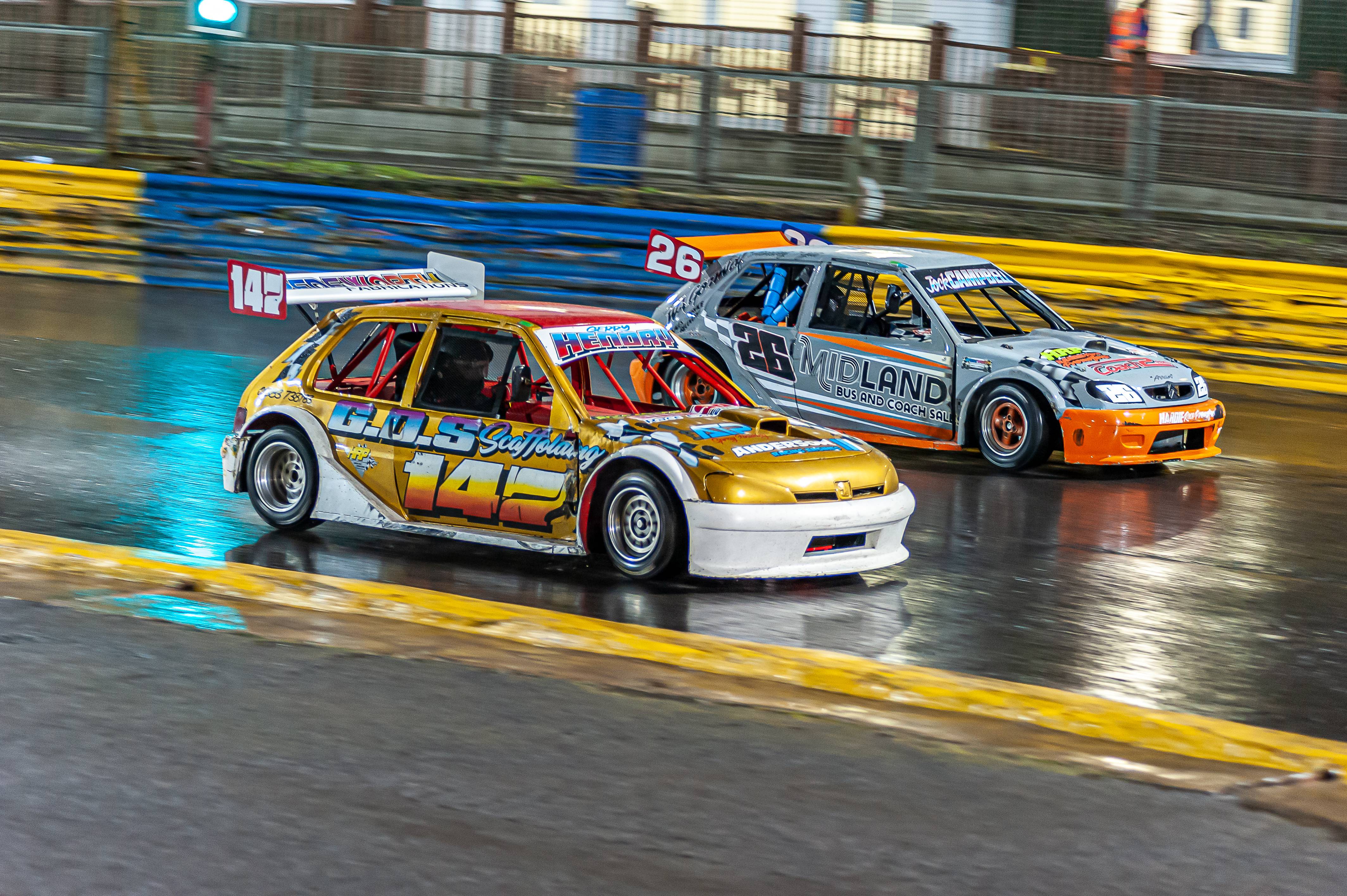 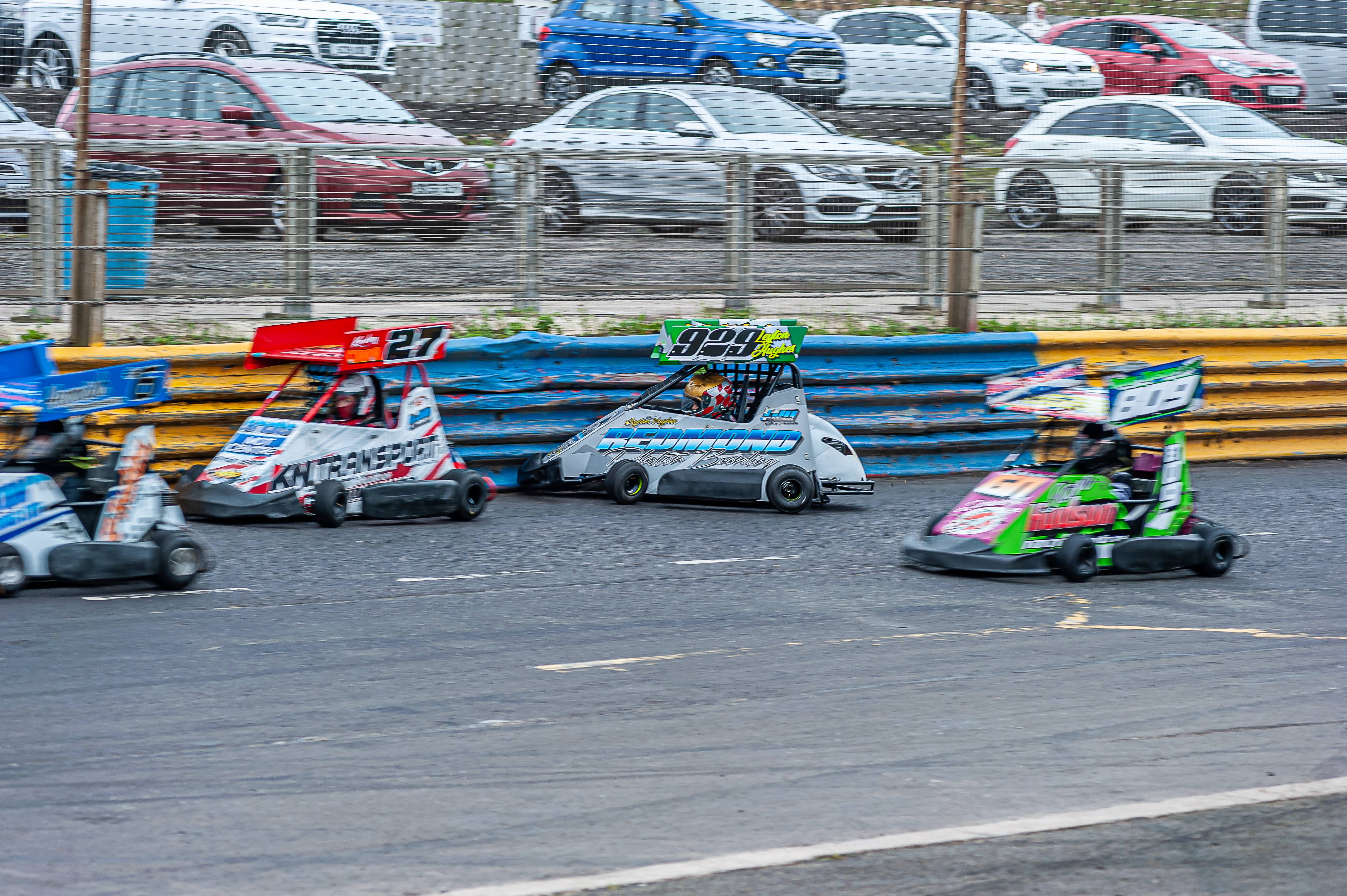 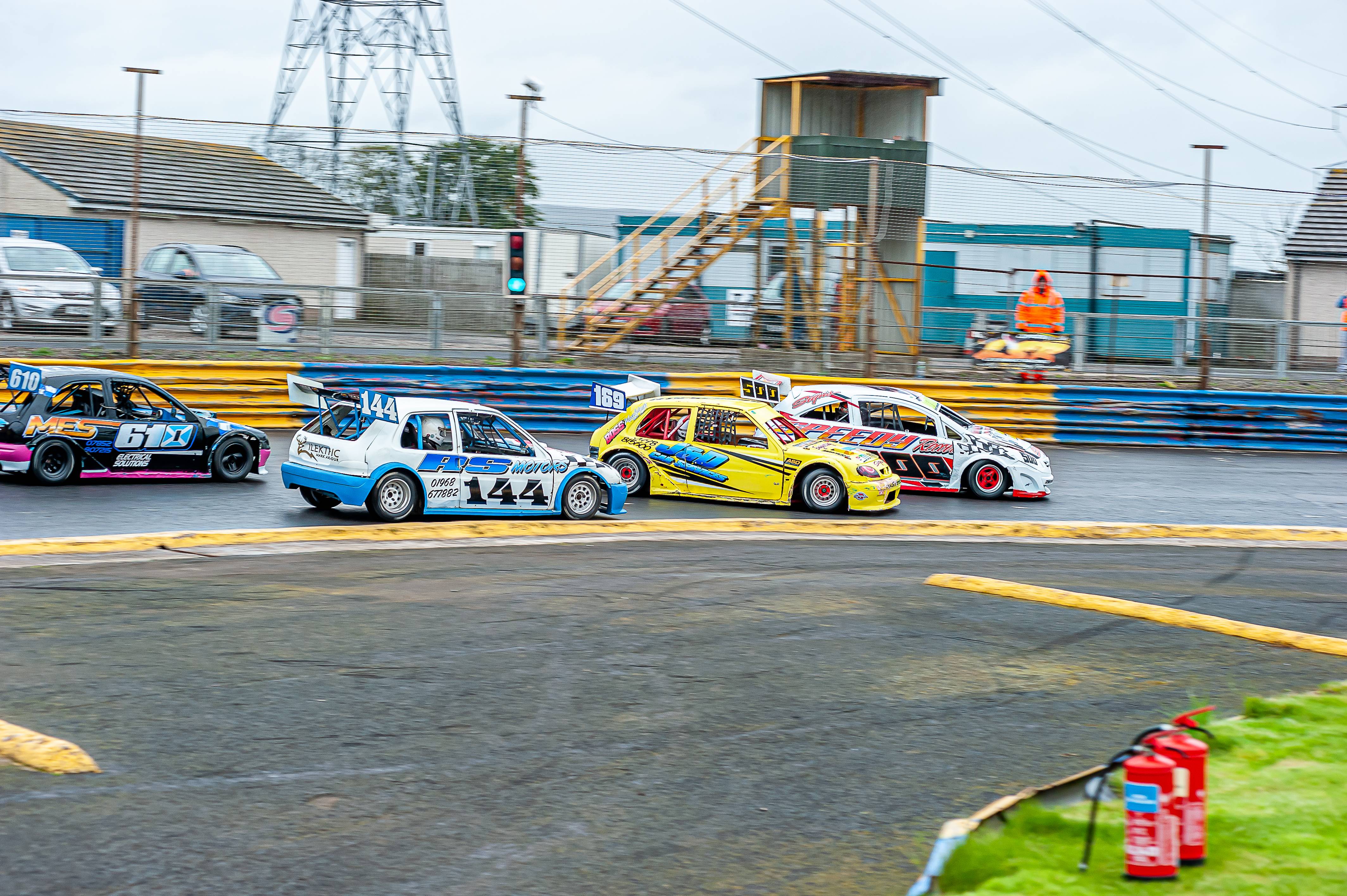 Saturday 12th September at Lochgelly Raceway seen the rain clouds make there way over Lochgelly Raceway just ahead of start time, and from then on, never receded, ensuring a damp, greasy and wet track throughout the night, providing a very mixed style of racing!

An astonishing 31 Ninja Karts were in attendance, which included 7 visiting drivers and 1 returning driver. The Whites and Yellows race kicked off the evening for the youngsters with 15 cars on track – the most in a whites and yellows event this season. Southern driver Clark Ferris took the race win, with Northern Irish driver Ryan Berry bringing his kart home in 2nd place, ahead of Saul Galloway in the UKMC sponsored kart. The first main heat of the night seen a couple of yellow flag stoppages, that was to be expected with the number of karts on track in greasy conditions. Jack Baird took advantage of his yellow grade starting slot as he took the race win, with Scottish Champion Toby Tyson finishing 2nd, and Kenzie Kopacz taking an excellent 3rd position. Kenzie looks set to be promoted up the grades again at the end of the month, given his excellent form of late – starting from blue at the weekend, didn’t appear to dampen his progress with another strong set of results. Kaden Connor, another driver that started down a grade from the last meeting, certainly looked back on form after a run of bad luck. Kaden went onto take a double race win on the night, with Kopacz taking another 2nd and 3rd position as well!

The Superstox seen a reduced number of cars against recent times with a few drivers unable to make the event due to other commitments, however, that didn’t mean the racing was poor – there was some excellent racing throughout the night from the open wheel class. Bryan Forrest looked quickest overall on the night, but Dean Johnston put in an excellent performance in the meeting final after dropping behind Forrest, to reel him back in and take the fight to him in the battle for the lead. Barry Stephen was soon on the horizon as well and it quickly turned into a three way battle for the lead, in a similar nature to that of heat 2 as well! Dean Johnston crossed the line first in the final, however was deemed to have jumped a start having came up the inside of a car that had moved wide, which seen him demoted to third position. This gave Bryan Forrest a hat trick of race wins on the night as he extends his lead at the top of the National Points Chart over Barry Stephen to 10 points.

The Junior Productions seen 19 cars take to the track – possibly the most we’ve seen at a domestic event, with a couple of Northern Irish visitors also in attendance in the shape of Chelsey Rainey and Abbie McKinstry. The Non-Contact formula were generally well behaved on the night, despite the difficult conditions. The opening heat of the night seen a photo finish as Harvey Sneddon challenged James Slater on the outside line over the closing stages – Slater held on by the narrowest of margins however, with Sneddon taking an unlucky 2nd place, with Jas Wall rounding out the top three. Heat 2 of the night seen Jas Walle continue his impressive form in 2020, as he took another excellent race win. Harvey Sneddon again, took 2nd position with Jack Beresford taking 3rd position. The meeting final seen a coming together between Koddi Wright and Jack Beresford which seen Koddi removed from the result. Jensen Bell took the win in the final, the third different winner from the 3 races. Harvey Sneddon completed a hat-trick of 2nd positions, whilst John Bremner fought his way through from the back to take 3rd position.

The 2.0 Hot Rods were back in action, and it was great to see Gerry Hendry back out on track after some time away from the formula. John Campbell was also back on track after a terrific job of repairing his car following last weekends fire. Ryan Mackie took the win in the opening race of the night in relative ease, with Scott Devine finishing 2nd and Ian Donaldson 3rd in what was his best result in the 2.0 Hot Rod formula to date. Teri Linden continued to build her confidence in the car, in what was difficult conditions. Teri led both heats for some time, before being closed down in the 2nd half of the race on each occasion. Gerry Hendry took the win in heat 2, with John Campbell 2nd and Linden finishing 3rd. The meeting final seen Linden and Mackie on the front row of the grid, and it was Linden who got away best as she led the race in the opening laps. Mackie struggled to get off the line which seen Campbell make some accidental and unavoidable contact with the 610 car. Gerry Hendry started the last car on the grid having failed to finish in the 1st race, meaning a 0 point scoring race. Hendry was in excellent form in the wet conditions and weaved his way through the pack in excellent style throughout the 25 lap race, to finish only a few car lengths behind Jock Campbell at the end of the race! Scott Devine finished in 3rd position, with Linden an excellent 4th.

The ProStocks were the final formula in action and provided some super racing throughout the night – With promotor William Hardie having a shot, although was removed from the results on each of the races for failing to have a transponder!! Ross Stewart took a hat-trick of race wins that will see him promoted to blue grade for next weekends race event.

We are back in action this Saturday with the 1300 Stock Car Scottish Championship on offer, as well as that of the Stock Rods! The Junior Productions, ProStocks and Classic Hot Rods all also feature in another 5 formula spectacular. First race 5.30pm! Book via our Advance Tickets section of our website, hardieracepromotions.co.uk