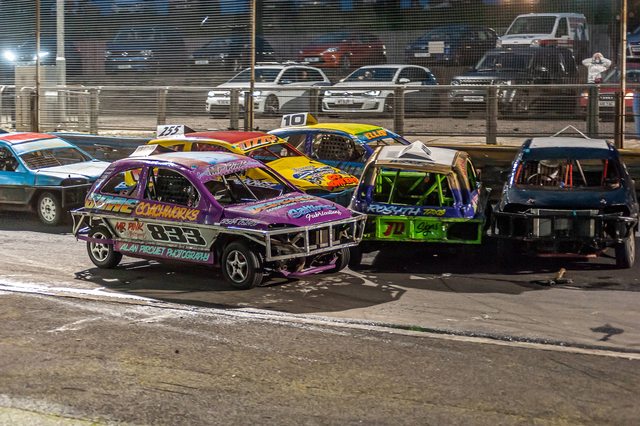 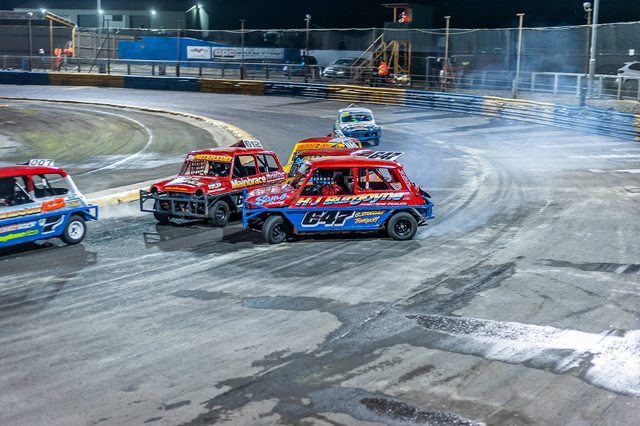 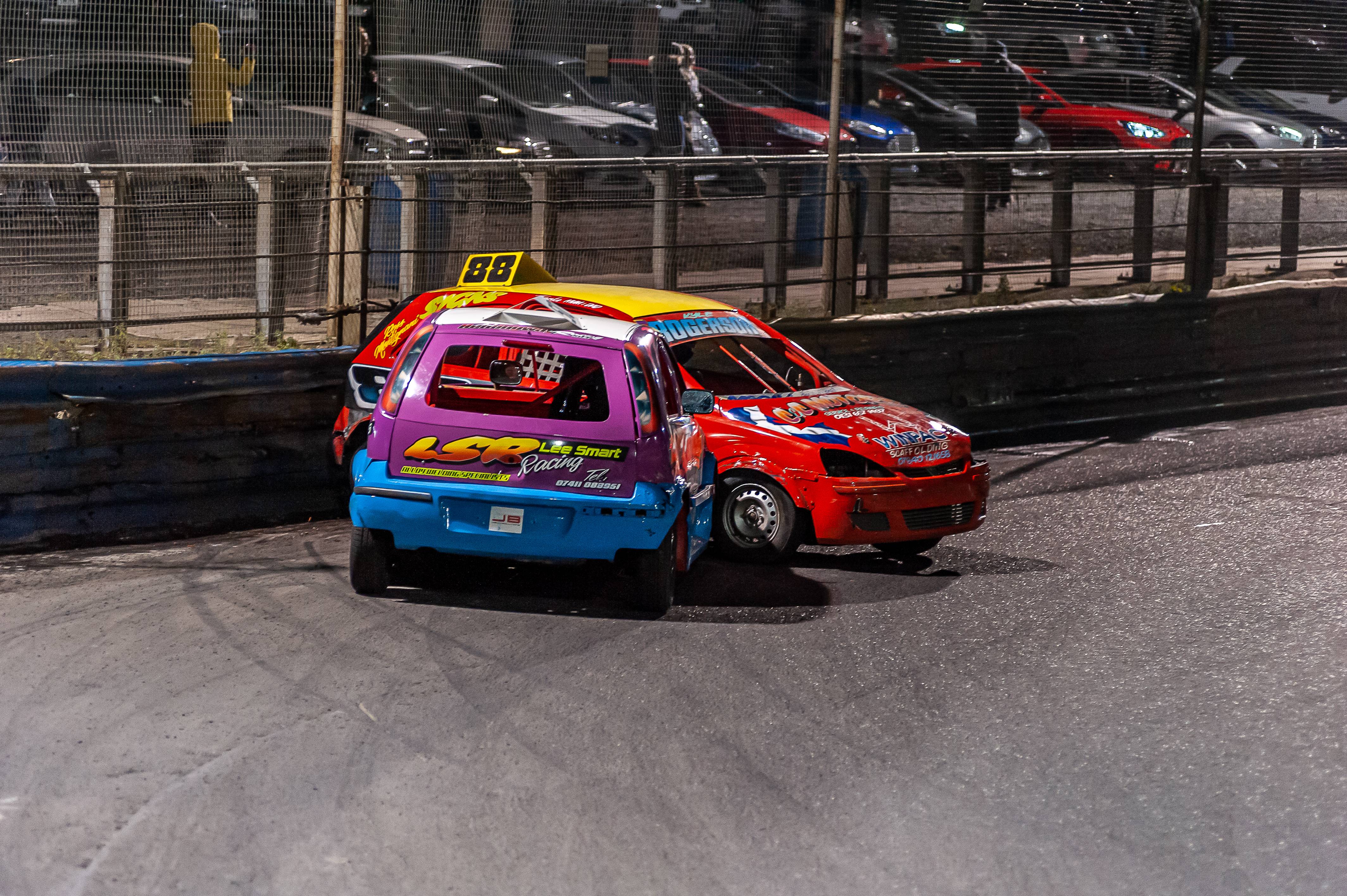 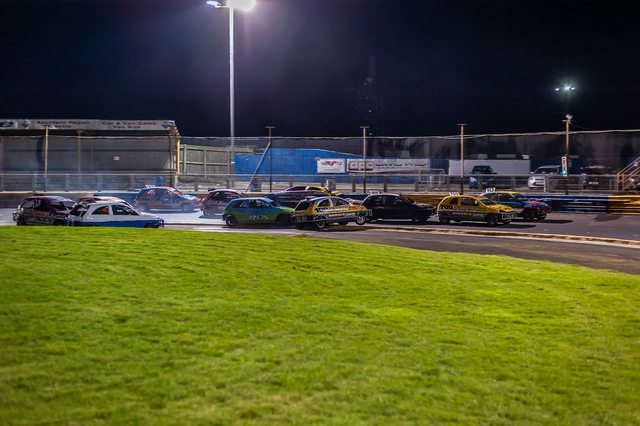 What a fantastic evening of stock car action at Lochgelly Raceway on Saturday 24th October, with every race providing some excellent entertainment.

It was the 1300 Stock Cars that stole the show however, as they battled it out for the annual Mr Gunn shield, which had some added sponsorship on it as a little extra incentive!! Just under 30 1300 Stock Cars took to the track including 3 debutants, and 2 returnees. Mitchell Gold, Charlie Henry and Robert Conway made their 1300 Stock Car debuts, whilst Callum Barclay returned to action for the first time in a few years. Ian Goodall also made an outing in one of the HRD hire cars! Hardie Race Promotions would like to thank the Gunn family, Claire at Mirror Mirror Salon, Fife Seat, Ringtone Race Painter and Responsible Electrical Solutions for there sponsorship of the event. The opening race of the night for the 1300 Stock Cars seen the bumpers go in from the offset, with Fraser Clark and Dougie Ford continuing their ongoing feud, which resulting in substantial damage to both cars and neither completing race distance! As the pack mixed it up, this gave Mitchell Gold and William Stawiarski an opportunity to break free at the front of the pack, with Craig Warner just behind. As the laps wore on, Chris Wallace found his car stranded on the inside of the track on the exit of turn 2, with an oil slick on track following Andrew Mathieson hitting one of the infield kerbs and damaging his sump, with only a few laps remaining, the race carried on as the drivers carefully negotiated the slick conditions. However, with only half a lap to go, Brant West found himself in the wall after hitting the oil slick and being spun around, with a host of cars joining the crash as well! Mitchell Gold took a debut win, whilst Stawiarski and Warner completed the top 3! Heat 2 of the evening seen Sean Naismith take an excellent race win, coming from the back of the grid and navigating the chaos in front of him in style. Patrick Calderwood brought his car home in 2nd, whilst Scottish Champion Fraser Clark finished in 3rd. The meeting final seen the grid closed up with a bumper to bumper start, in graded order. As the green flag dropped for the first time, the bumpers went in, with the lead pack pushing out towards the wall, Andrew Mathieson from further back the grid, put in a big hit on a pack of cars ahead, forcing them all wide, further up ahead, Graham Osbourne found himself spinning towards the wall on the exit of turn 4, before being pushed sideways down the length of the straight by the oncoming pack. Mathieson came up the inside and was into the top few positions as a result, whilst Sean Naismith tried to follow his line through, but tangled with Ian Goodall before striking a kerb and damaging his car as a result, meanwhile, Goodall also managed to get underneath the spun Osbourne car flicking it over onto its side, coming to a halt on the entrance to turn 1. A red flag was called for with the race restarting again, though with a few casualties as a result! Craig Warner led the way in the early stages of the restart before dropping back the field following a succession of hits and nudges! Fraser Clark soon found himself up front, with Danny Whyte, Rory Naismith, and Kyle Hegg battling it out with him. The quartet exchanged blows lap after lap, with positions swapping on a regular basis, before Naismith lost power and retired from the race; this left the trio of front continuing to trade blows, though Fraser managed to put some daylight between himself and the two behind. Hegg as well ran into issues and had to retire with only a few laps remaining, giving up his podium position. Fraser Clark took the win and the Mr Gunn trophy, whilst Whyte finished 2nd ahead of Declan Lindsell!

The Ministox providing further contact racing with some super bumper action going in through every race! The youngsters certainly know how to put on a show and keep there peers on there toes when it comes to action! Robbie Armit was back in his own car following a string of bad luck last weekend, and was right back on the pace, taking a heat win in the opening race for the Ministox, whilst Lewis Burgoyne brought his car home in 2nd place, with points leader Charlie Hardie in 3rd. Heat 2 of the night seen Hardie get the break from the pack whilst Armit, Burgoyne, Scott Allardyce, Ryan Borthwick etc all had to battle hard to get through the field. This allowed Hardie to race through to the lead of the race without too much challenge, though Armit soon battled through to 2nd place, overcoming Rian Mitchell in the closing stages of the race. The final race of the night for the Ministox seen Armit again take a race win, following a great race with Charlie Hardie and Scott Allardyce. As the three cars battled for the lead with hits going in on each other, Armit broke clear of Hardie and Allardyce to take the win, with Allardyce and Hardie continuing to swap places for the remainder of the race! Hardie moved into 2nd place with just a lap to go, and despite a last lap effort from Allardyce, managed to hold on!

The Junior Productions have provided some excellent racing throughout 2020, and Saturday was no different. The youngsters continue to improve on track and go as fast as they can, whilst trying to avoid contact with other cars. Dylan Smart crossed the line first but was docked for contact on the night, however, on appeal and video review, this docking was rescinded, meaning Smart took the race win, with Koddi Wright 2nd and Jensen Bell 3rd. Heat 2 of the night seen some more great action from the youngsters, with Dylan Smart again showing great pace, however was docked for a push on Kyle Rogerson in the early laps of the race to move up a place. A race stoppage was called for following a collision between James Slater, Samantha Rogerson and John Bremner, with Slater and Rogerson initially coming together, before Bremner was caught by the spinning Rogerson car, which resulted in Rogerson and Bremner going into the wall on turn 2. Visiting driver Chelsey Rainey took a the race win come the chequered flag, with Harvey Sneddon finishing 2nd, and Jensen Bell promoted to 3rd following the docking of Dylan Smart. The meeting final seen 2020 newcomer Jack Dixon claim a flag to flag victory – his first victory in the formula – finishing ahead of Harvey Sneddon and Jas Walle.

The CC Rods seen 21 cars take to the track ahead of there Scottish Championship meeting next weekend – and provided some super bumper to bumper racing throughout the night. The non contact class often provide some on track chaos, but the racing standards were generally excellent at the weekend with very little pushing being witnessed. Through each race, the racing was fast, hard and on the most part fair – there was some rubbing of bumpers and doors, but that all added to the excitement of the racing! Raymond Brown took a race win on his return to racing, whilst Ian Christie and Emma Kirk rounded out the top 3 in the opening race of the night – a boost for both drivers ahead of next weekends Championship event! Heat 2 of the night seen Callum Elliot take a win – the former ProStocker showing that he can mix it in the non-contact formula as well, with Christie and Steven Duffy completing the top three. The meeting final seen the lower graded drivers again dominate proceedings – Ian Christie took a race win, possibly his first of the season, whilst Emma Kirk brought her car home in 2nd, finishing ahead of Andy Nelson in 3rd.

The Stock Rods were the final formula in action and with 18 cars in attendance, provided some great racing throughout. Adam McFall held on from Jim Pitcaithly to take the opening heat of the night, whilst Gary Nicholls finished just behind in 3rd place. Heat 2 seen David Crichton take a much deserve race win following a season of troubles and bad luck. Niall McFerran finished 2nd, whilst Siobhan Martin completed the top 3. The meeting final went the way of Jim Pitcaithly, though he had to work hard for it, being pressurised by Adam O’Dell from the outset. A yellow flag stoppage for a sticken David Crichton car seen the pack close up, with Pitcaithly having to fend of O’Dell and Lattka for the remainder of the race!

We are back in action this Saturday (31st) with another bout of action – the Michelle Freck Memorial event takes place for the 1300 Stock Cars, whilst the Micro Bangers also feature. The CC Rods will battle it out for there Scottish Championship, and the SUperstox for the Tom Michie Memorial! 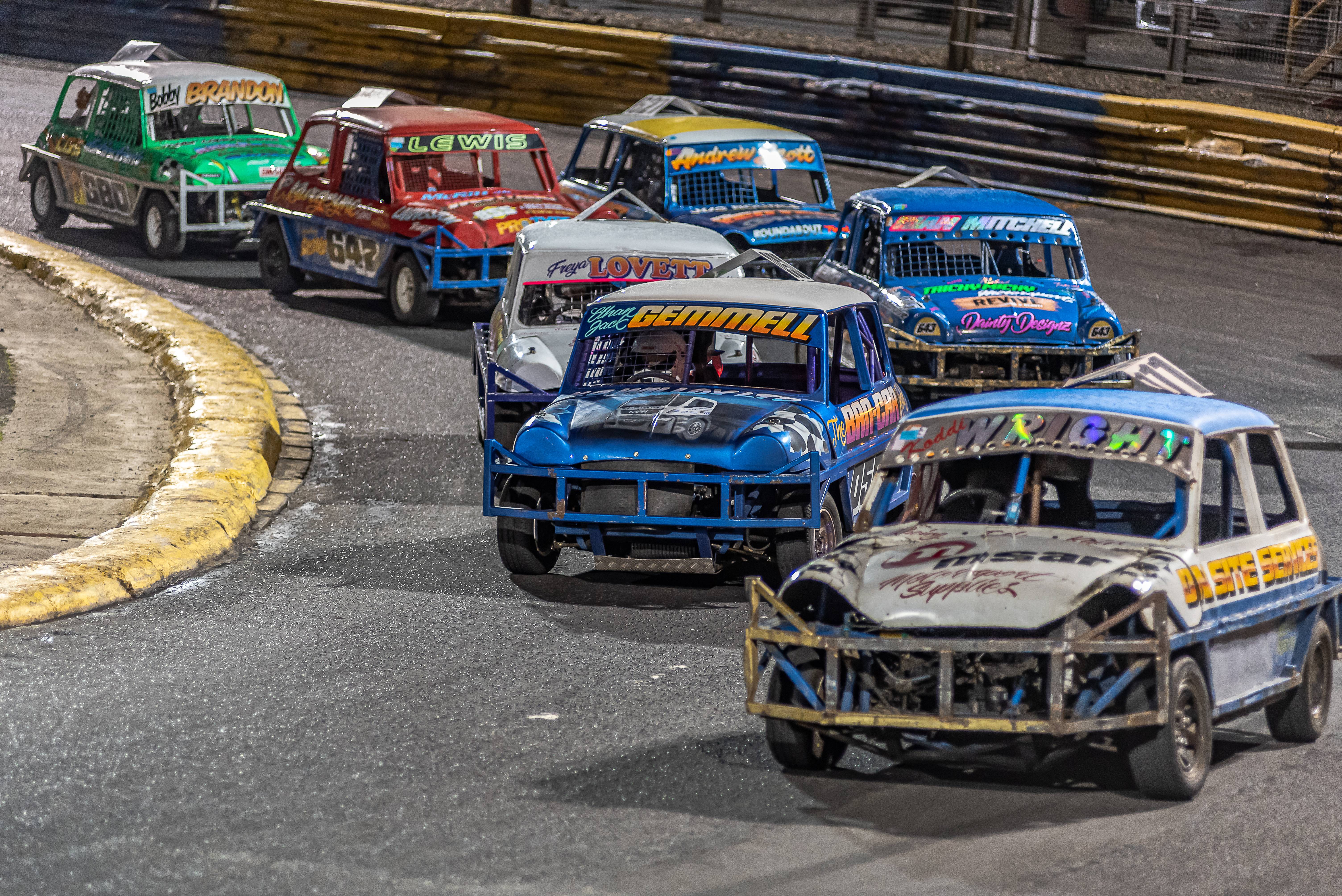