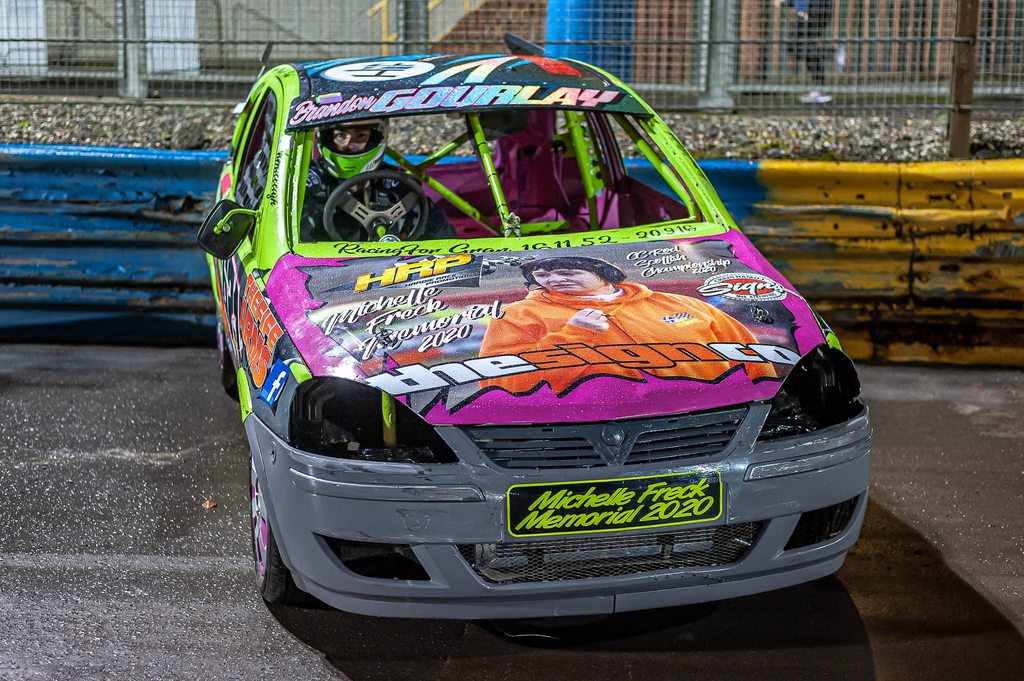 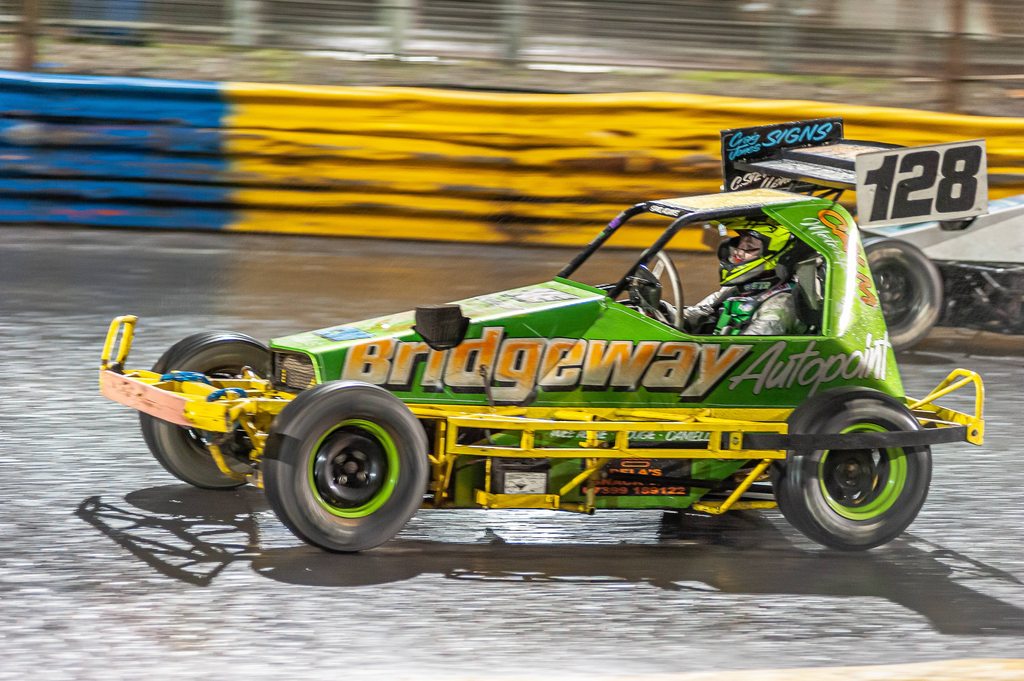 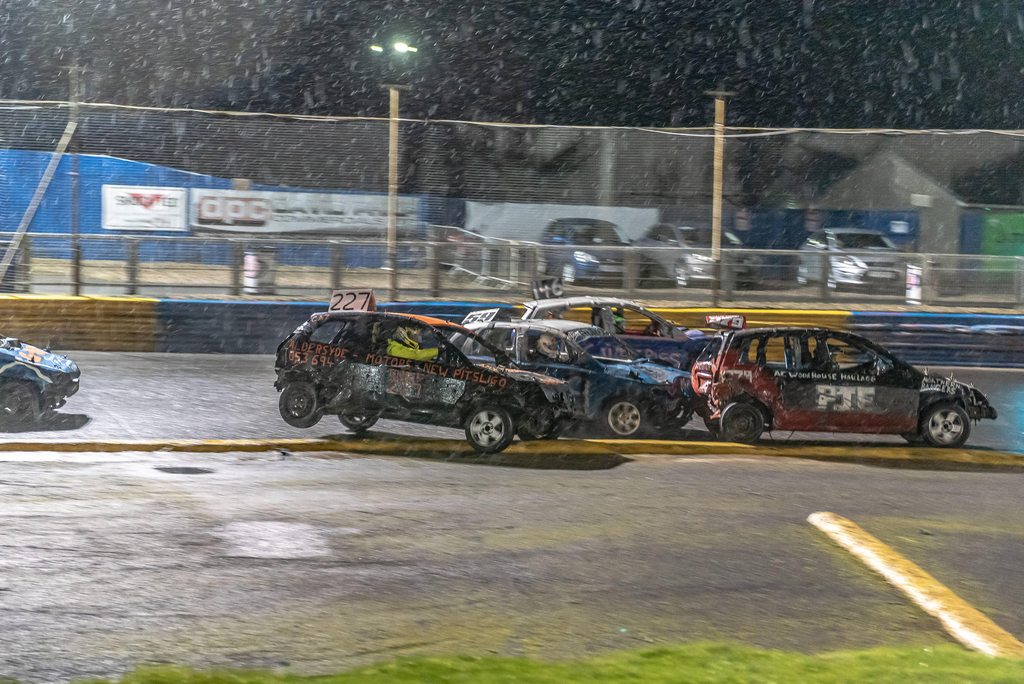 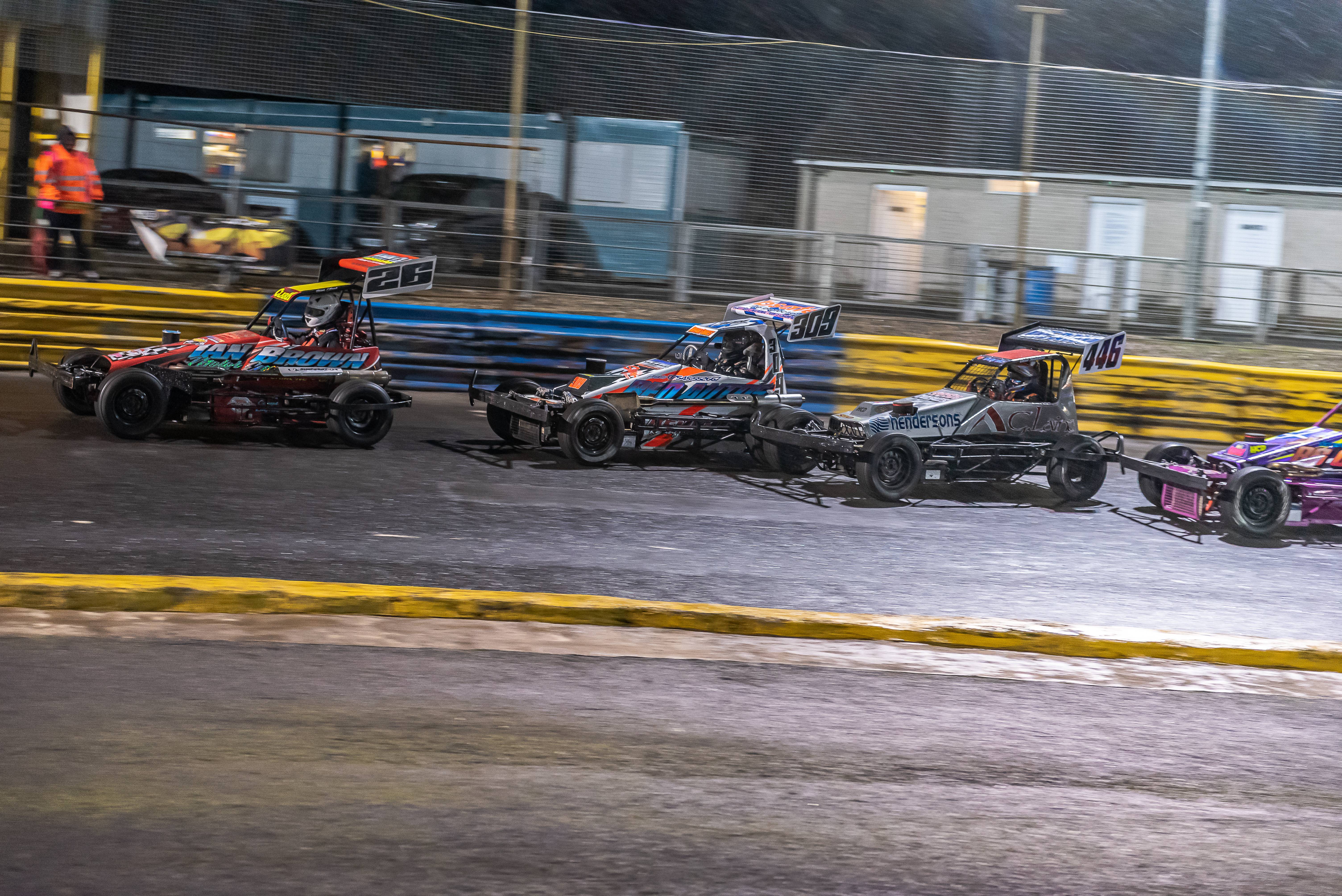 It was a damp and cold night at Lochgelly Raceway, but the spirits were high around the venue as we remembered Michelle Freck – a member of the HRP team who we sadly lost in 2018 after suffering from a short illness. Although current restrictions meant that we couldn’t conduct the event as we would have liked to do so, a fitting tribute was made from the race teams, staff and drive in spectators. The track staff wore something pink, whilst drivers painted bumpers and wheels pink in a show of support for the Freck family.

The 1300 Stock Cars battled it out for the Michelle Freck Memorial Shield, won last year by Fraser Clark. With just shy of 30 cars in attendance, the racing was eventful from start to finish despite the wet and windy conditions; The bumpers flew in, although not over aggressively as the drivers jostled for positions, rather then crashing. Graham Osbourne battled his way through from, the back of the grid, to take an opening race win, finishing ahead of Gregor Whyte and the ever improving Craig Warner. Heat 2 seen Mitchell Gold lead the opening part of the race, though came under pressure from Craig Warner in the second half of the race, with Warner moving ahead and taking a well deserved race win, whilst Gold brought his car home in 2nd place, with Gregor Whyte taking another top 3 finish. The Michelle Freck Memorial was the next race on track, which seen the song, ‘See You Again’ played out ahead of a minutes applause, horns blasting, and drivers revving their engines, before the cars started rolling to ‘We Will Rock You’. As the green flag dropped, the bumpers flew in on the opening lap, with Gold hanging on in front, though would soon be overtaken by Patrick Calderwood. Further back the field, Kyle Hegg was in no mood for messing around as he took no time in disposing of those in front of him as he put up a chase to Patrick Calderwood up front – Hegg was soon upto 2nd place on track, and with a bunch of back markers ahead of race leader Calderwood, all eyes were on the battle for the lead – would Calderwood navigate the back markers smoothly, or would he lose valuable time to Hegg in 2nd? As it transpired, Calderwood was likewise in no mood for messing about and fought his way through the traffic quickly without too much time being lost – Hegg had closed the gap slightly, but wasn’t quite close enough come the end of the race for a last lap lunge – Calderwood took an excellent race win, with Hegg finishing 2nd and Warner in 3rd. Danny Whyte continued his recent improvement as he took a respectable fourth place finish. As a reward for the efforts through the last few months, an extra race was scheduled for the 1300 Stock Cars, with Kyle Hegg again in super form – From the outset, there was no messing around as he pushed the pack of cars ahead of him wide to come up the inside, though moved over a bit too soon, which seen him spun around and losing the best part of a lap, only rejoining just ahead of the race leader. The race was yellow flagged mid way through after a big impact for debutant Declan Flynn, his car going head on into the wall with an impact that felt the ground move. Fortunately, Flynn climbed out of his car, though in some discomfort! Upon the race restarted, up front it was again Calderwood, Warner and Whyte. Hegg was back onto the back of the grid and made a lightning quick start which seen him gain 3 or 4 places in the opening lap of the restart! One by one, he made his way through the pack bringing his car home in 3rd place! Calderwood took the win though, which will see him automatically upgraded to blue, with Warner finishing in 2nd, just ahead of Hegg.

The CC Rods battled it out for their own Scottish Championship, and a record 25 cars took to the track. Brandon Gourlay sported a super tribute to Michelle as he had his bonnet wrapped to mark the occasion. 2 reverse grid heats would form the grid for the Scottish Championship. The opening heat seen Lee Wotherspoon take his first win of the season, with Graham Campbell and Emma Kirk completing the top three. Heat 2 of the night seen Ian Donaldson take a win, with points leader Brian Allen finishing 2nd and Paul Bell in 3rd. As the grid formed for the Scottish Championship, Emma Kirk, Brandon Gourlay, Lee Wotherspoon and Ian Donaldson occupied the front couple of rows on the grid. Gourlay and Kirk had an excellent battle as they raced wheel to wheel in the opening stages of the race. Kirk looked to be getting ahead on the inside line, though somehow, Gourlay managed to get across in front of Kirk to take the lead of the race. Emma Kirk was never far away though, with Lee Wotherspoon likewise in close contention to begin with, before dropping back from the lead 2 cars. A yellow flag was called for following a coming together with Stewart Paterson and Lee Scott, with Paterson stuck on the outside of turn 2 facing the wrong way. The pack closed up and Gourlay led them away; Gourlay got away well and despite pressure from Kirk behind still, maintained his lead. Wotherspoon remained in 3rd position, although under considerable pressure from the pack behind, Wotherspoon held a tight inside line which seen him cross the line in 3rd place come the end of the race. Brandon Gourlay took the win to be crowned the 2020 Scottish Champion, whilst Emma Kirk finished in an excellent 2nd position.

The Superstox were in action as they raced for the Tom Michie Memorial Shield, which was up for grabs for the final time. Ciaran Adams, a 2020 debutant in the formula, led the race for the best part before being overtaken by National Points Champion Bryan Forrest – Adams didn’t give up though, and battled Forrest for the remainder of the race which was a brilliant battle. Kudos go out to the drivers showing respect to each other, whilst racing for the win. Dean Johnston, was perhaps given a bit of a pre meeting curse after it was mentioned that he was one of the top drivers in the wet conditions – struggling for grip most of the night, though still took away a decent haul of points. Heat 2 of the night seen Ciaran Adams take his first win in the class, with Forrest finishing around half a straight behind, and Mark Brady in 3rd place. The meeting final, which was the Tom Michie Memorial race, seen Adams start from the back of the yellows as a result of his race win. His progress to the front wasn’t as quick as he battled to get ahead of Evan and Lee Clark. The pack behind though, was in no mood for taking it easy, as they battled it out hard, but fairly. The bumpers flew in, different racing lines were used, and some exciting racing resulted; Mark Brady, Bryan Forrest, Allan Gibson and Barry Stephen all battled for a good few laps. This gave Adams an opportunity to break clear at the front and open up a gap. Forrest managed to shake off the cars around him as he found himself in 2nd place, around a straight behind the Adams car. As the laps drew in, the gap closed down as well, but Adams was showing great maturity and ability as he kept the gap reasonably steady. Adams took the win as a result, much to the joy of his onlooking family. Forrest finished 2nd, with Brady in 3rd.

The Micro Bangers were in action for the 2nd time in October, and with a reasonable amount of cars on track, the racing was good to watch – although not a huge amount of wrecks, there were plenty of pushing and shoving through the heats as the drivers raced to save the car for the meeting final, the Michelle Freck Memorial Trophy. Craig Royal took the first race win of the night, with Don Lineham finishing just behind in 2nd place, and Scott Fraser in 3rd. Heat 2 of the night seen Callum Campbell take a win, with Fraser in 2nd and Steven Bolton in 3rd. The meeting final seen the drivers go in a bit harder with the hits, with Mathew MacFarlane giving John Paton a big hit into the wall in the early stages. Just missing the stricken Barry Jarman car. Don Lineham took the win – possibly his first at Lochgelly, with Craig Royal finishing 2nd and Jamie Sangster 3rd, before Steven Bolton took a Demolition Derby win.

The National Hot Rods were also in action, with Ian Donaldson taking a hat trick of race wins as he looks to qualify for Ipswich in July 2021!

We are back in action this Saturday at Lochgelly Raceway, with the Big Van Banger Scottish Championship taking place. The Ninja Karts, CC Rods, Ministox and Superstox all also feature, alongside some Firework! First race, 4.45pm. Advance booking via our website only. 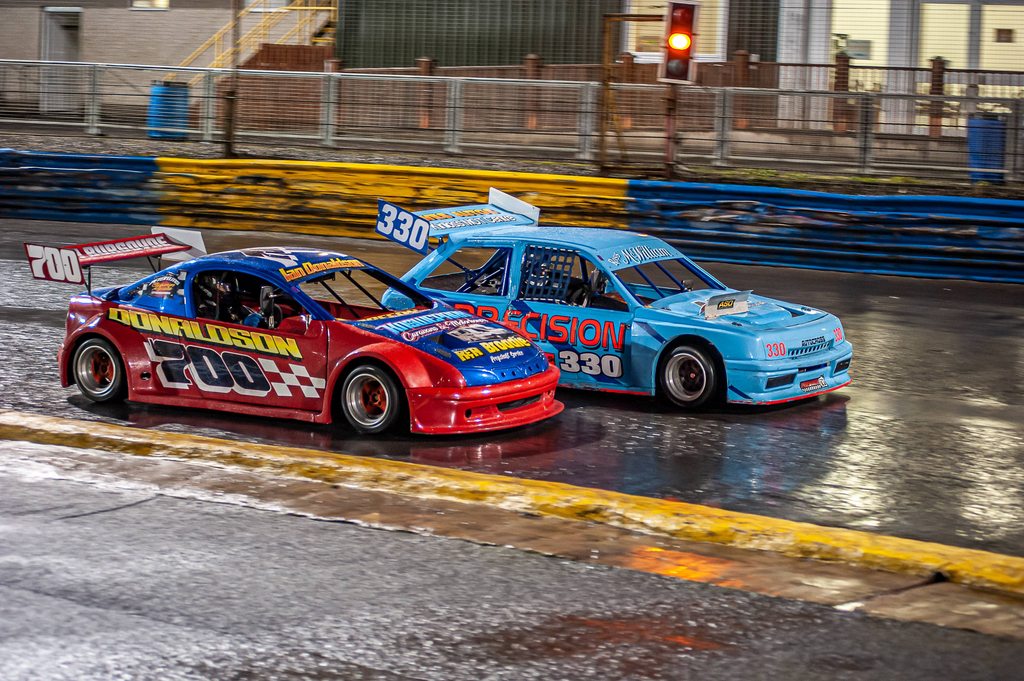