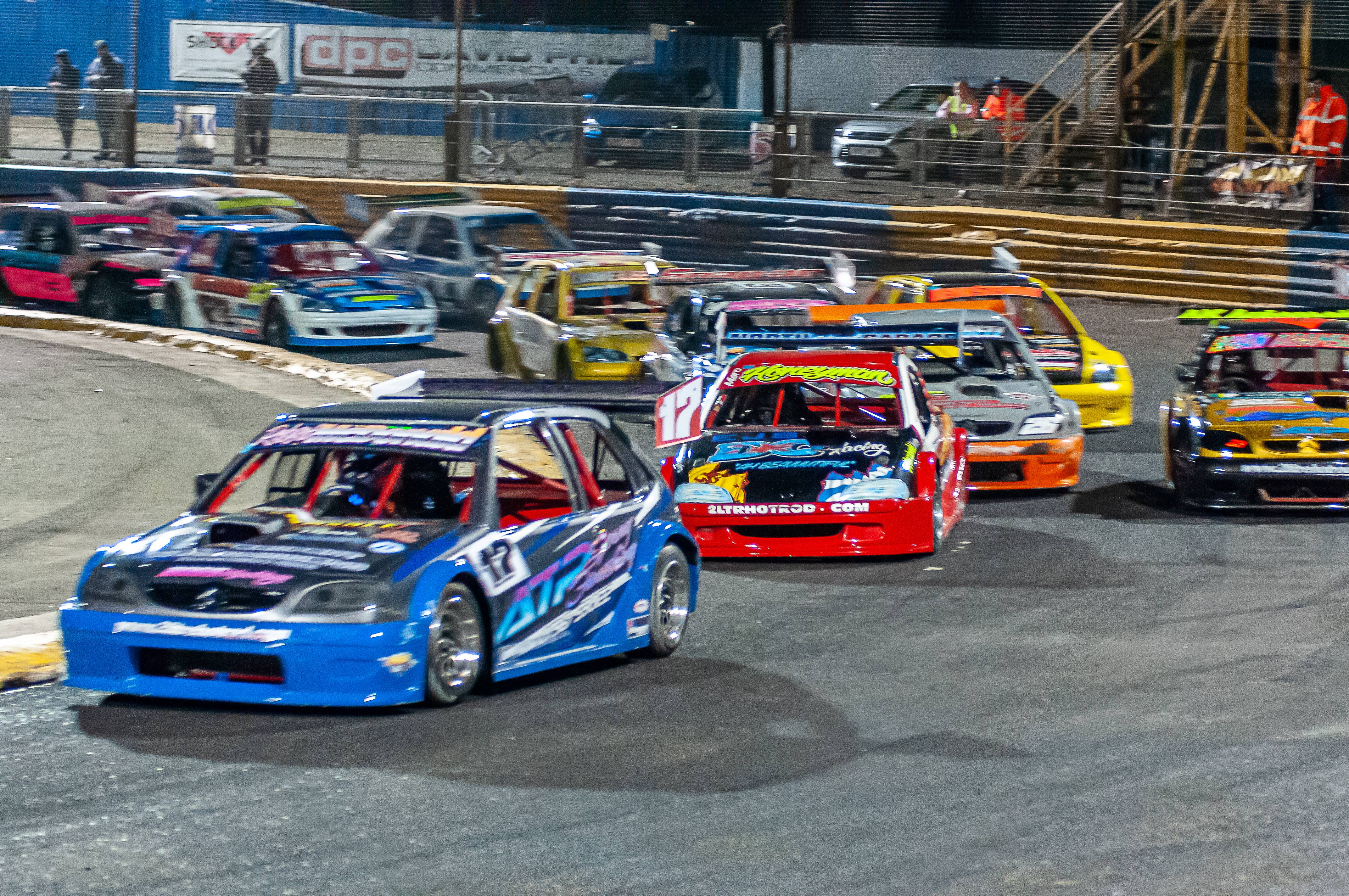 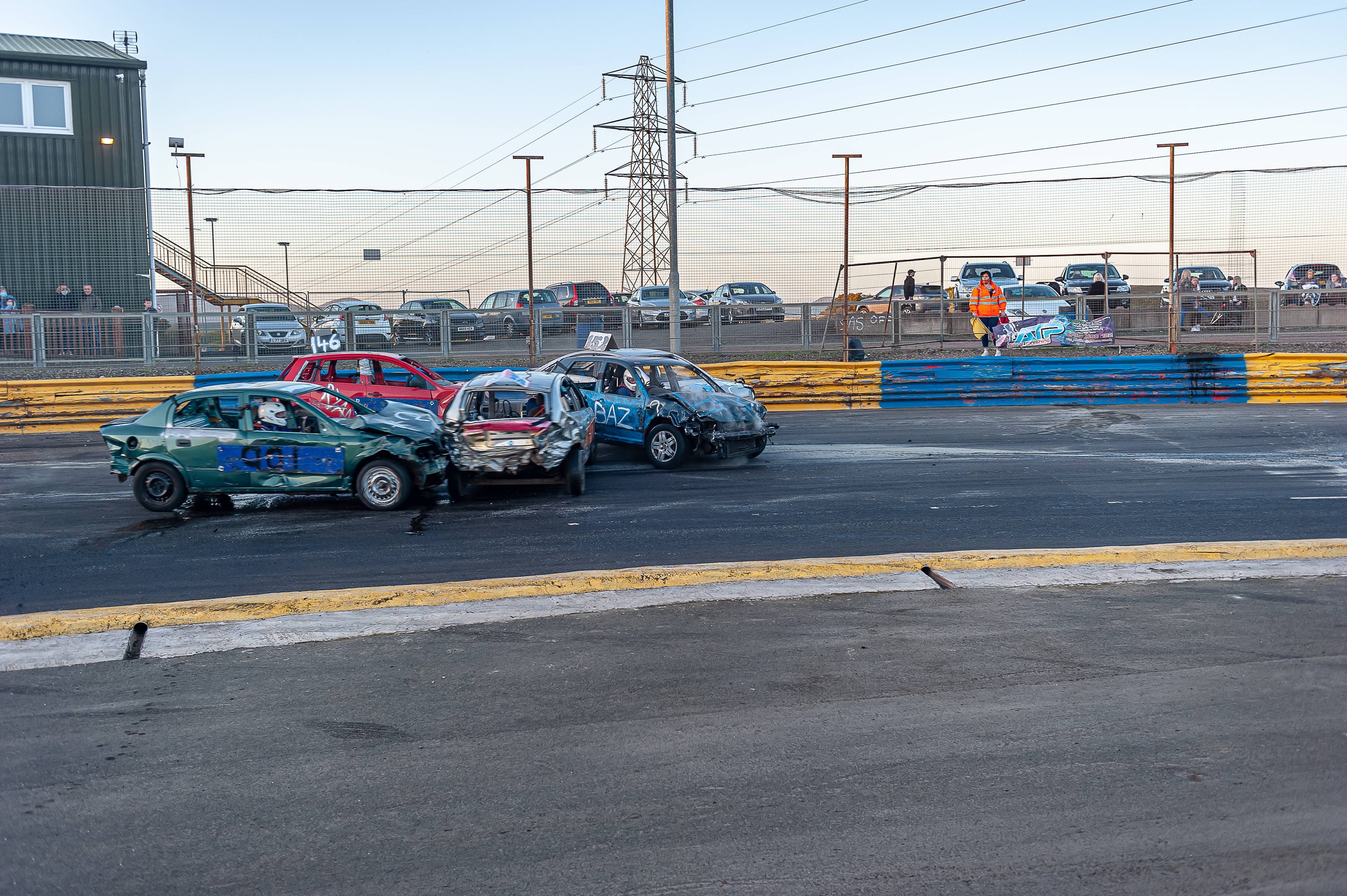 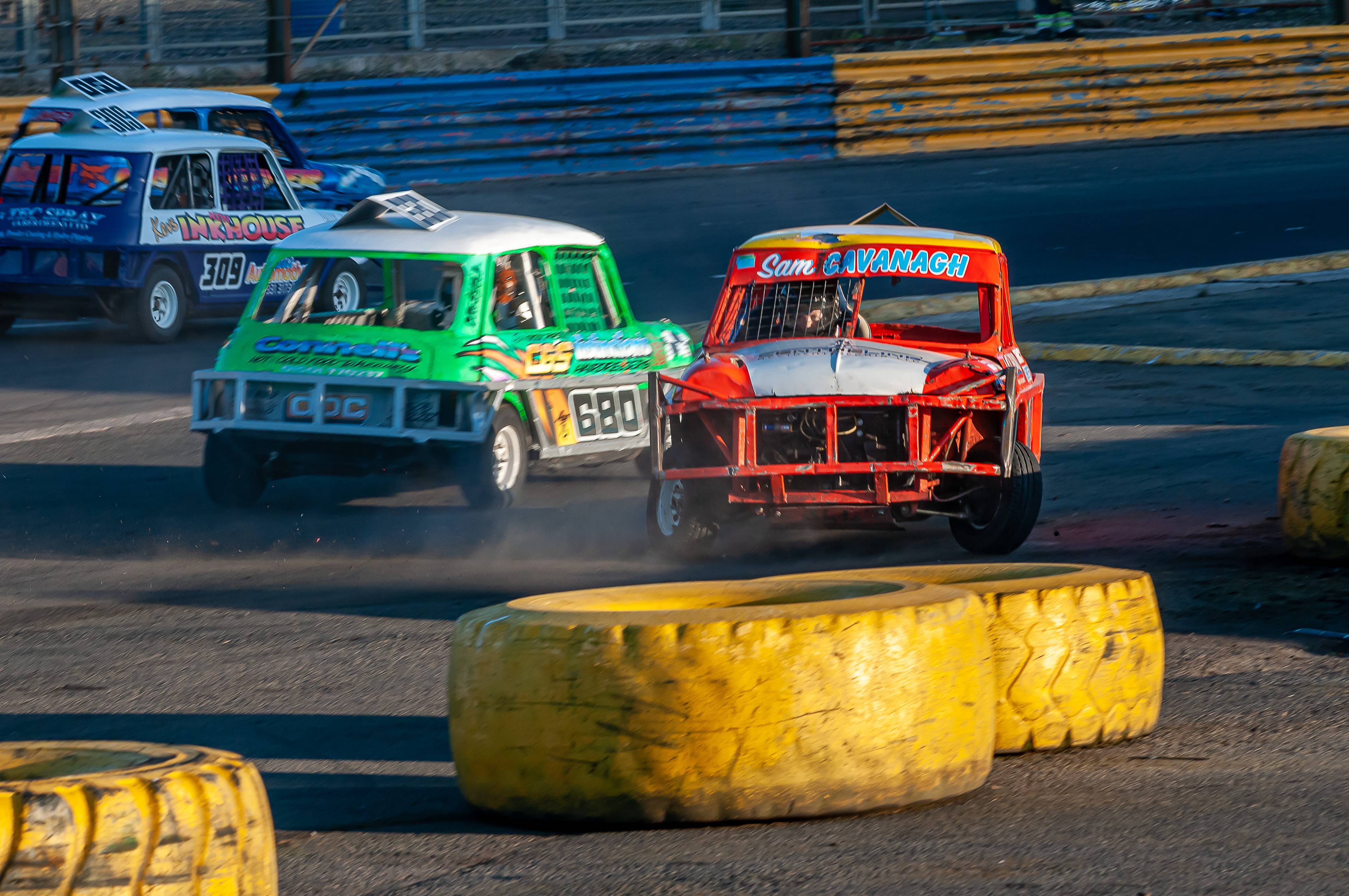 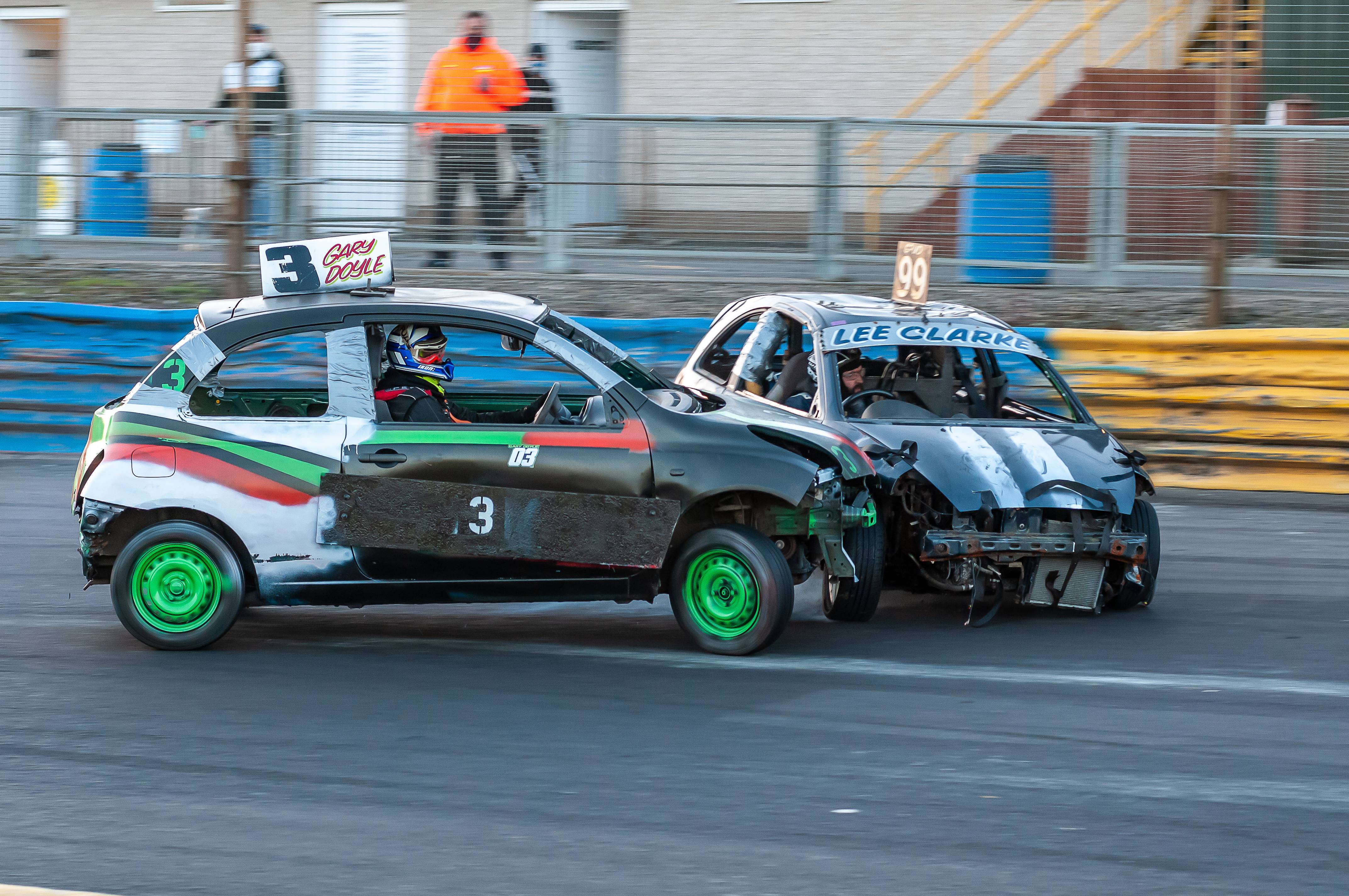 The Back 2 Basics Bangers put on a terrific showing on Saturday 26th September at Lochgelly Raceway, with 25 cars taking to the track in what was the best turn out for the formula since it was re-introduced at the start of 2020. The Scottish Championship was on offer and the drivers were full of adrenalin and as soon as the green flag dropped, the carnage ensued. A red flag was called for on two separate occasions as the field soon depleted! Only 12 cars made the start of the race after the previous failed attempts. Lee Clarke and Jim Dillon were the ones that got away best and with the laps coming down, and an oil stricken track to contend with, Clarke went for a crash that put an end to his race, whilst Grumpy took over at the front. With only a handful of laps remaining, Dillon put himself under pressure by spinning out, allowing Douglas McConnachie to close up and take the lead of the race. Dillon couldn’t make enough inroads into the lead again, with McConnachie taking the Scottish Championship, with Jim Dillon finishing runner up, and Daniel Duncan in 3rd, with just 4 cars finishing the race! McConnachie took another race win in the 2nd race, before being taken out in the final race of the evening for the formula, by Sean McConnachie!! Sean McConnachie took the race win with Dillon and Simon Thomson completing the top three, before Dillon took the Demolition Derby win!

The 1300 Stock Cars were in action again following on from there Scottish Championship last weekend, and again, put on a great showing of Stock Car Racing! Just over 20 cars took to the track and with the formula following on from the Bangers, the conditions were far from ideal, which did make for some interesting racing that would be more accustomed to a drift track at times! It was Sean Naismith though that adapted the best, showcasing his talents in the conditions as he swept to an excellent hat trick of race wins. Dale Robertson took his car to a 2nd place finish in the opening race, with Jamie Muirhead having his best finish in the formula in 3rd place. Danny Whyte and Regan Watson took 2nd and 3rd in heat 2, which was a marvellous achievement for Regan after having more troubles in the opening race. The meeting final seen Danny Whyte take another 2nd position finish – arguably his best meeting of the season – with Gregor Whyte taking a 3rd position.

The Ministox seen over 20 cars take to the track as the again put on a performance. White grade driver Freya Lovett continues to build her confidence up in the formula scored her first points as a reward for her efforts on Saturday night. Charlie Hardie extended his lead at the top of the points charts as he took a superb hat trick of race wins. Robbie Armit continued to score consistently well, however, an engine problem in the meeting final seem him fail to score. Bailey Millar brought out his new car after suffering a lot of damage last time out, and was immediately on the pace with the car, scoring top 4 finishes in all three races. Rachel Kidd returned to some sort of form on Saturday night, after finally catching a bit of a break from the bad luck that has savaged her season since the restart. Rachel was on the pace and was able to mix it up with the likes of Robbie Armit and Ryan Borthwick, as she took away a decent amount of points from the meeting.

Robert McDonald starred in the 2.0 Hot Rods in the Wayne Lee car as 14 cars took to the track to provide some impressive racing throughout the night. Robert was joined on the grid by Chris Burgoyne, who had an outing in the Ian Donaldson car, and World Champion Dave Leech in what turned out to be a star studded line up. Ryan Adamson returned to action following a short absence and was back on the button as he roared to an opening heat win, finishing ahead of Marc Honeyman and Ryan Mackie. McDonald showed his experience as he got to grips with the car as he stormed to an excellent win in heat 2 from the back of the grid, with Adamson finishing 2nd and Honeyman 3rd. The meeting final seen McDonald lead the way from the outset, though Marc Honeyman managed to maintain a reasonable gap to the National Hot Rod World Champion as he brought his car home in 2nd place, with 2.0 Hot Rod World Champion Dave Leech finishing in 3rd.

As always, the CC Rods provided more super on track action with various talking points as the battle heats up for the track championship. 20 cars took to the track in what is one of the best turn outs of the season. Graeme Hardie, Shane Allen and Callum Elliot made their season debuts, with Allen fairing the best out of the trio. David Glencross and Kyle Hutchison were both on the pace throughout the night, with both drivers taking a well deserved race win – Glencross in the opening heat, and Hutchison taking the meeting final. Kenny Pitcaithly took his first win in the formula as well, as he raced to the flag in the 2nd heat of the evening. Dylan Coutts continued his progress as he took a couple of 3rd place finishes, whilst Brian Allen and Lee Scott scored poorer than both drivers would have hoped for as they battle it out for the track championship!

We are back in action this Saturday as the Superstox and Junior Productions both race for their respective Scottish Championships, whilst the UKMC sponsored Ninja Karts, ProStocks and 2.0 Hot Rods are all in action as well. Tickets are available from our website for this event, with COVID guidelines in place. Racing starts at the earlier time of 5.15pm! 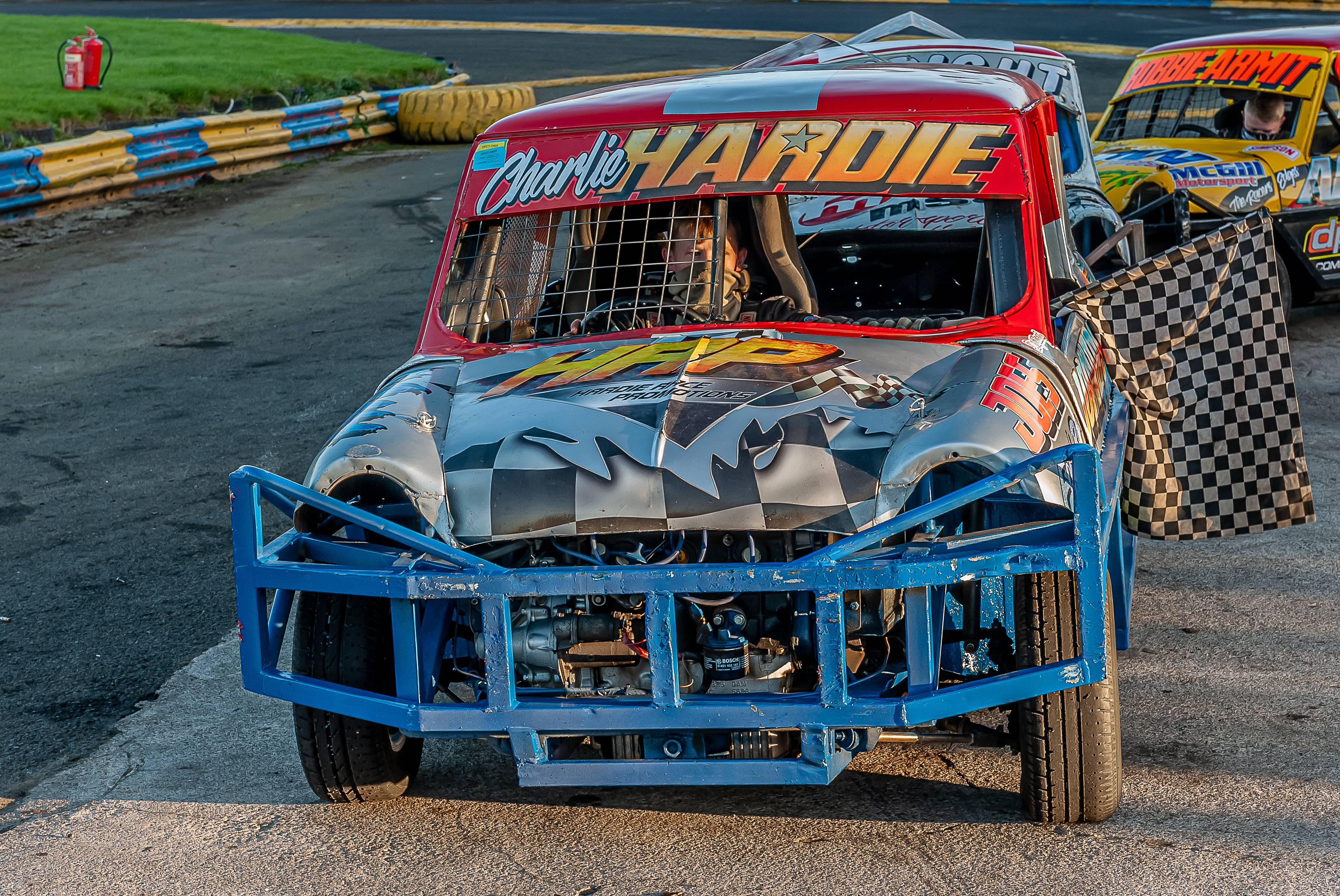